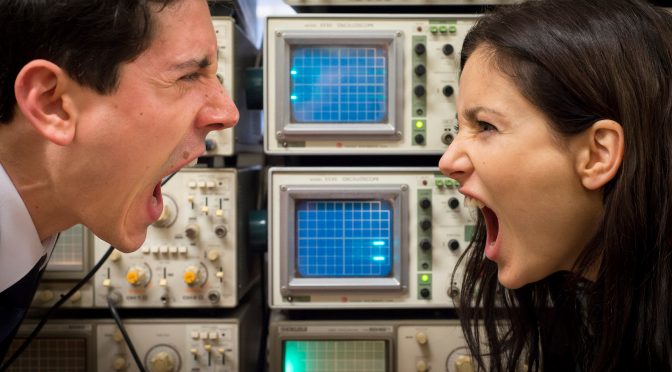 dreamthinkspeak is an internationally renowned theatre company that specialises in site-specific promenade works. Conceived and directed by Tristan Sharps, its latest piece, In The Beginning Was The End, takes over the basement of Somerset House and parts of King’s College London, ambitiously and occasionally wittily transforming them to present a dystopian vision of science and materialism. The show’s scale may be impressive, but it struggles to live up to the ideas it tries to present.

Although the Bible is name checked, In The Beginning Was The End takes its inspiration primarily from the work of a visual artist – Leonardo da Vinci no less. I confess I’m not confident I’d have worked this out without some prior knowledge and that can’t be good thing. It’s great fun to wander around the building admiring what they have done with it, and there’s a thrill about attending some parts of the performance on your own (if you get lucky), but the level of engagement theatre of this kind should generate isn’t reached, and that’s a woefully missed opportunity.

The dangers of technology and big business are all too clear: the initial scene forces small groups of audience members to evacuate a meeting room via a laboratory. You then join an ‘open day’ for the company Fusion International keen to present its new technology. These products, presented by a polyglot cast, are witty and the numerous actors deal with close audience contact well. But as the machines go wrong, and the company culture (and its staff) are driven by muzak and customer complaints to insanity and stripping, it all becomes a little obvious.

There’s a great deal of video work in the piece: clever silent films full of conversations you aren’t privy to that add to the paranoia with their reflexivity. But neither they, nor the increasingly derelict displays of Fusion International’s Tension Negation Technology, really add much menace or atmosphere. The ideas behind the piece are predictable, with a lazy left-wing sensibility and generic sci-fi approach. The TNT on offer doesn’t make much of an explosion.

Written 7 February 2013 for The London Magazine