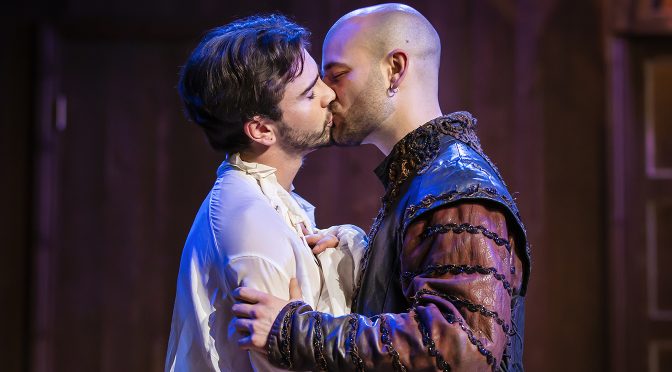 Aside from the Greeks, can you think of a play that’s inspired as many others as Shakespeare’s Romeo and Juliet? Rachel Garnet’s 2018 take is to tell the tale from the perspective of Tybalt and Mercutio. And to make the men a new pair of star-crossed lovers.

The idea shouldn’t be a surprise, given how much Shakespeare is played with. But if it sounds a little sensational, think again. Starcrossed is a serious piece – if it has a failing it’s a lack of humour – that shows deep thinking and sensitivity, and a firm grasp on its source material that is super smart.

The development of Shakespeare’s minor characters is a huge success. Yes, Garnet has plenty to work with, but she creates solid, interesting characters that are an exciting prospect for performers.

Mercutio – a “fickle creature” – is a pacifist and an all-round outsider, vividly brought to life by Connor Delves, who has travelled with the show from New York. It’s easy to see Mercutio captivating all he meets with his intelligence and dangerous flair. Tommy Sim’aan takes the role of Tybalt and is just as magnetic to watch. The character’s confusion about his status as well as sexuality are evoked in equal measure and never overstated.

Starcrossed has charm too – which brings us to the final performer, known as The Player, who takes on all the other roles! So, Gethin Alderman becomes Lord Capulet, Paris, Romeo (and Juliet) as well as Tybalt’s father – a great creation whose scenes are a real highlight. Switching so many roles cannot fail to impress, and Alderman adds a playfulness that is welcome.

Garnet’s script is a marvel, a verse play with snatches of Shakespeare (not just from Romeo and Juliet) cleverly incorporated. Stimulating and erudite, this is a text to treasure. It is a credit to the performers and Philip Wilson’s impeccable direction that such learning is worn easily. As with the best Shakespearean productions, we appreciate the wit but don’t feel excluded by it.

Garnet manages to look at the circumstances she creates from the perspective of gay men and pays attention to the history. The couple’s fear and the degree of acceptance they have about keeping their love a secret is moving. There’s a consistent tension in seeing how the script fits into the bigger story, what lines are used or ignored, as well as the exciting speculation about how much change we’ll see.

Best of all, concerns for the future, wrapped up in questions of honour and legacy, are explored with insight and originality. Creating a story “never told” has a powerful impact. Along with Mercutio’s speculation about how lives might be different in 500 years’ time, the idea that so much LGBTQ+ history has been lost is used by Garnet to great effect.