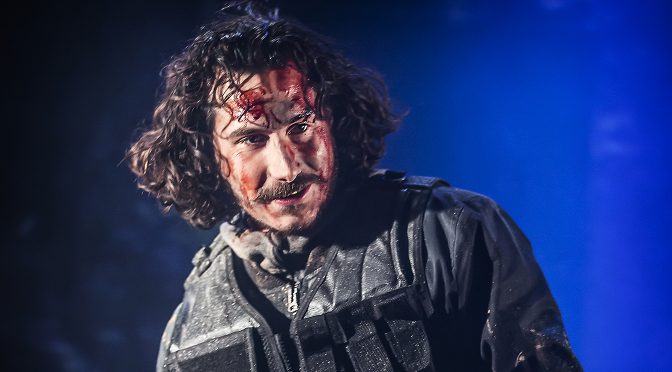 There was bad and good luck for the Watermill Theatre last night with its transfer of Shakespeare’s Scottish play (I’m risking nothing). After just one scene, Lady Macduff needed medical attention – sympathies and best wishes to her. Fortunately, a decision was made to persevere thanks to a member of the audience who was in the production previously. Gratitude to Emma Barclay for helping out – she did a great job. Although the circumstances for reviewing aren’t ideal, it’s only appropriate that I also go on.

So huge credit to the show’s small cast who gave little sense of being thrown by events – their professionalism is commendable. The production is marked out by its youthful appeal and tension (maybe a few extra nerves helped). Director Paul Hart clearly has plenty of ideas and, even if they are a mixed bag, they can be appraised regardless of injuries.

On the plus side, the depiction of the violence in the play through movement is done well (congratulation to Tom Jackson Greaves). The lighting effects, from Tom White, and projections from Louise Rhoades-Brown, are very good. The idea of using actor musicians is always impressive. But the delivery here needs finessing: the songs chosen prove distracting and, more importantly, too many lines are lost in the noise.

If Hart wants a Macbeth that’s brash and bold then he has succeeded. But the consequence is a production that’s overblown and loud. Both leads are strong performers who seem wasted. Emma McDonald’s Lady Macbeth is, frankly, camp – a decision that does not serve the character well, no matter how great her outfits. It’s a shame, since McDonald and her stage husband have great chemistry and fantastic stage presence.

In the lead, Billy Postlethwaite possesses all the magnetism you could wish for as a guerrilla-style soldier with a hipsterish edge. I liked the way this Macbeth is out of his depth when it comes to plotting. But there’s no respite from madness for Postletwaite to work with. The witches (nicely delivered by the whole company) turn him too quickly. Both he and the production are hampered by the conceit of Hotel Macbeth. Macbeth as a rebel and rock star I get, but not a hotelier!

While Lucy Keirl has a good night doubling up as Seyton and Macbeth’s Porter, little else seems achieved by the hotel idea. It’s not the only tweak Hart makes that puzzles: are Macduff’s children really killed? And why is Duncan strangled first? But the abundance of ideas, like the events of the evening, show a company full of spirit. Regards again to the injured Lauryn Redding. Her colleagues displayed a determination the whole ensemble should be proud of.