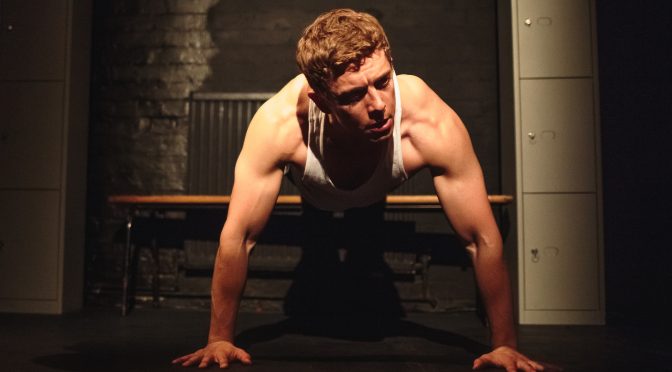 As the humour in Tom Vallen’s play shows, it’s temptingly easy to make fun of the idea that someone can be addicted to exercise. Along with being such a baffling notion to most of us, the macho rituals surrounding a workout create plenty of smiles. But Vallen aims to use the jokes pointedly in his serious play. Sponsored by the Body Dismorphic Disorder Foundation, this is a dramatic look at a psychological problem with tragic consequences that’s thought-provoking and important.

As a writing debut the piece is modest but sound. A slightly too speedy journey into body dysmorphia, with little grounding and only suggested explanations, is documented rather than explored. Another debut, as director, from Philip Scott-Wallace is more assured with the cast thoroughly drilled and their comings and goings choreographed nicely. Undoubtedly, Vallen has written a brilliant showcase for his acting talent as he takes the central role of Will. His physicality in the piece is sure to impress while the descent into anxiety is meticulously delivered.

Vallen’s co-stars also do well. Jennifer Brooke fleshes out her role as Will’s girlfriend Rebecca remarkably, suggesting the real woman beyond Will’s romantic ideas. As Will’s womanising gym buddy, a character of surprising depth, and then Rebecca’s colleague, Gabriel Akuwudike makes the most of two chances to impress, skipping between the roles to great effect. Showing the impact on friends and loved ones of such a damaging mental health condition is a sobering addition. There is a notable lack of sympathy for the play’s once amiable lead, who turns psychotic so abruptly, that gives the play dramatic bite.