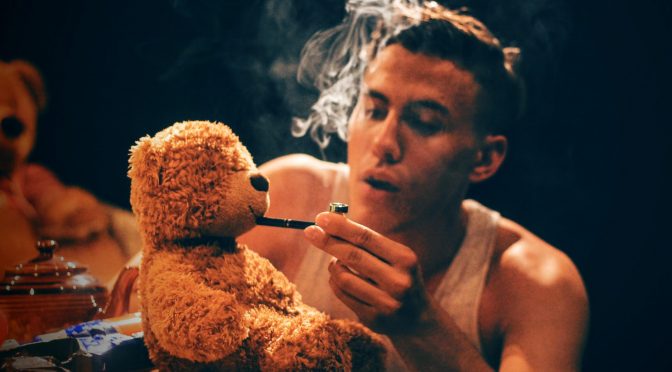 Sensitive souls may not welcome the return of ‘in-yer-face’ theatre – writing marked by hothouse aggression and surreal shock tactics – but this revival of Anthony Neilson’s 1994 play, from director Phil Croft, shows the genre has intelligent admirers. The cast is remarkably strong – with two exciting professional debuts – and the work feels smack up to date.

Ambiguous sexuality is only one part of the confusion gripping this strange trio: the characters are deliberate exaggerations. And yet Alexander Pardey and Jolyon Price (pictured) both impress, with youthful bluster and insecurities that remain recognisable.
Tadge brings grim conspiracies of sexual violence with him and a paranoid feast ensues. Neilson’s script balances violence and comedy brutally, Croft guarantees tension and Tom Manning performs so magnificently that I was genuinely concerned.

Tawdry and full of fragility, Penetrator is truly pathetic by the end. The writing is strong enough to generate a good deal of sympathy for the teddy bears, let alone these lost characters. Neilson depicts masculinity as infantilised but, more importantly, indicates the consequences of this and the pain that ensues.