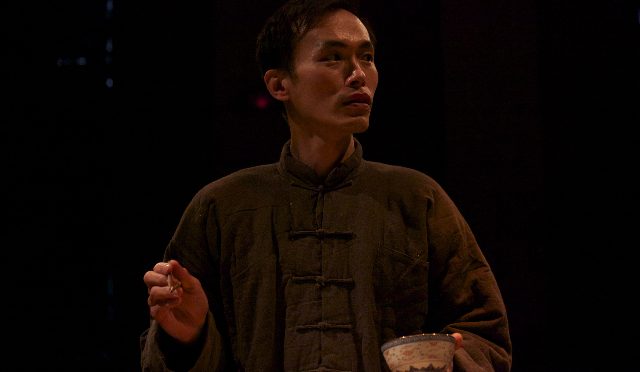 Limehouse once had a thriving Chinese population and, along with this, a lively reputation as an exotic den of vice. From Dickens to Conan Doyle, the area’s opium dens were a gift to writers seeking to create racist stereotypes of immigrants. The Kandinsky Theatre has taken over the sadly decrepit Limehouse Town Hall to allow us our own intoxicatingly intelligent journey back in time.

Make no mistake that we are tourists. Director and writer James Yeatman opens the play, based on a real-life story, with a group much like ourselves – turn-of-the-century Londoners on a tour and looking for escapism. Limehouse has had lots of gentrification since the time of the play – desirable terraces and modern flats surround Hawksmoor’s St Anne’s – but the Town Hall itself has seen better days. Despite clever efforts by designer Amy Cook, it isn’t well suited as an auditorium. The idea of staging the play there is neat, but the production is a success despite, rather than because of, its location.

Following the death by drug overdose of a musical-hall actress, police inspector Thomas Burke heads for the East End to investigate the source of her supply. There follows an entertaining detective story that includes plenty of wry observation about cultural encounters. The whodunit is presented well, with a series of interviews and statements that allow Alex Marx and Sarah Sweeney to show off their talents as various characters.

The pressure to find a solution to the case becomes about providing a story for the sensation-loving press. As interludes of musical theatre mimed by the cast reinforce, this story doesn’t have to be real so much as entertaining –with prejudices never questioned just confirmed.

Lee Chee Kong and his Irish wife Mita are the couple forced to take the blame. They are utterly believable as a devoted pair and the scenes of their romance and intimacy are the play’s highlights. Their exploitation to fit a bigoted narrative is made tragic by wonderful performances from William Mychael Lee and Kerry-Jayne Wilson. These actors alone make it a Limehouse Night to remember.

Written 1 June 2010 for The London Magazine