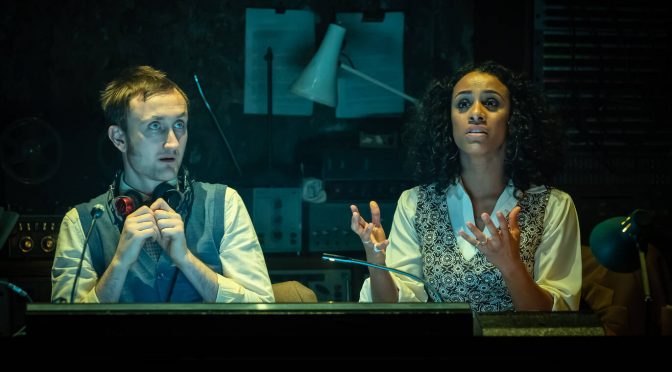 This must be the show of a lifetime for composers and sound designers Ben and Max Ringham. It follows a fictional sound engineer – the oddly named Gilderoy – who is working on an Italian horror film, and a claim might be made that sound is the subject matter for this whole show. Let’s be ringing, crystal clear that the Ringhams do a great job throughout. It is their night… but perhaps theirs alone.

A too thin plot fails to hold attention even at just over 90 minutes. As Gilderoy works behind the scenes to find a particularly horrible noise, and as his backstory is clumsily developed, there’s little tension and no surprises. Tom Brooke makes for a charismatic lead, doing well to restrain the hammy humour in the piece, but the character’s timid English manners are too caricatured, and contrasting his inhibitions with his continental colleagues becomes painful. As for the continually promised horror that’s played with, you’d have to be very timid to jump even once. While Gilderoy is searching for what frightens us most, his biggest fear is literally written above him in lights – no wonder the quest ends up dragging.

Weightier themes painfully forced into the play are the real terror here: Art and Ethics, screamed out loud. We get two sides of the debate, first from a voiceover actress offended by torture scenes. Eugenia Caruso does well and manages to craft a credible character here, but her points are pretty obvious. Then the auteur director himself comes in with a seductive defence. Credit to Luke Pasqualino, who has a good stab at making the part memorable, but the appearance is too brief and, by the time he arrives, it’s already obvious that the film being worked on is too awful to bother about.

Director Tom Scutt tries hard to raise the stakes. This show is clearly a pet project for him and writer Joel Horwood, who have brought Peter Strickland’s screenplay to the stage. As well as bells and whistles, Lee Curran’s lighting design includes complete blackouts (rarer than you’d think in the theatre). And there’s an effort at comedy with two assistants, both called Massimo (chortle), played by Tom Espiner and Hemi Yeroham, whose creation of the sound effects before our eyes proves a diversion. But restricting action to the booths that make up Scutt’s and Anna Yates’ design makes the show static, as surprisingly little of the stage is used. And placing the actresses’ booth in one corner of the stage is a big mistake – if you do bother to see the show, don’t sit stage right. Time and again it’s too clear that a film would be (and was) more effective. There’s a growing frustration that anyone bothered to stage the piece at all. Let’s hope that the Ringhams, at least, had fun.