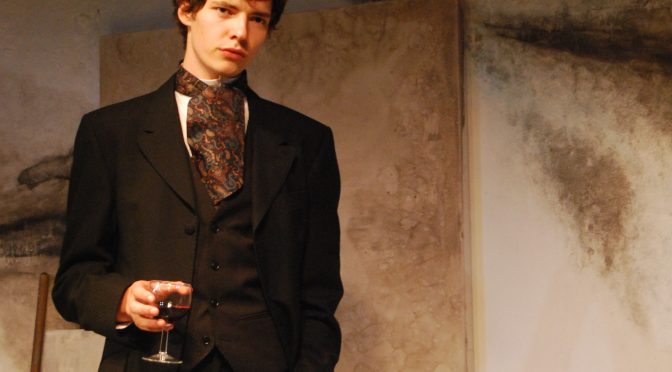 Oscar Wilde’s lover, John Gray was reportedly the inspiration for The Picture of Dorian Gray. In CJ Wilmann’s new play, the remarkable history of this poet and priest makes for a thought-provoking tale. The repercussions of Wilde’s life and crimes upon Gray and his wider circle are powerfully evoked, with the focus on Gray’s own story.

Wisely, Wilde himself never appears. The characters around him are interesting enough. The artists Charles Ricketts and Charles Shannon, living together in Chelsea, entertain Oscar’s new fling, Bosie, while consoling the discarded epigone Gray and introducing him to the real love of his life, Andre Raffalovich. Wilde’s doomed affair with Bosie provides a third compelling love story.

It’s no easy task to recreate how these 19th-century aesthetes spoke. But Wilmann clearly immersed himself in the period and manages to produce convincing dialogue, while adding a wry humour and necessary modern touches that aid clarity. There’s a 21st-century sensibility that’s occasionally clunky, in particular the Charles’ relationship feels too contemporary, but Wilmann juggles our own perspective on these fin de siècle characters with what life might really have been like for them.

Gus Miller’s skillful direction produces a gallery of strong performances. Tom Cox probably has the hardest job as Bosie, but he tackles the role forcefully and does well. The two Charles are played by Oliver Allan and Jordan McCurrach, who make a convincing, sympathetic couple.

In the lead roles, there are two great performances. Christopher Tester tackles of the part of Raffalovich, the sophisticated French critic, with great assurance, providing the play’s most moving moments. In the title role, Patrick Walshe McBride adds some stunning touches, doing justice to Wilmann’s clever text – a scene in which he nervously reads one of his poems to a high-powered audience is superb. He does justice to Wimann’s work and makes this a portrait worth going to see.

Written 20 August 2014 for The London Magazine