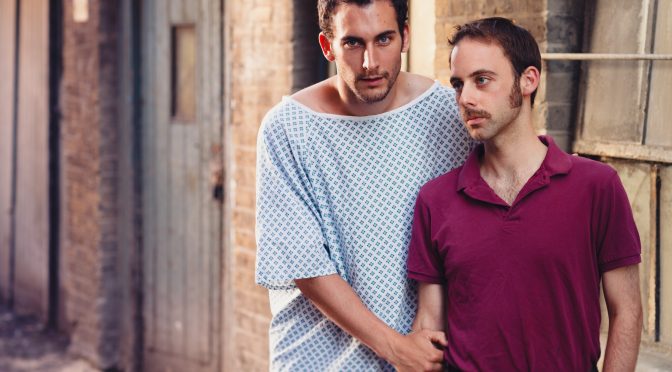 Reportedly the first theatrical response to the AIDS crisis, William H Hoffman’s 1985 play, As Is, receives its first revival in London for over a quarter of a century. The play takes us back to a dark age of paranoia and persecution. Estranged lovers Rich and Saul become reunited in the face of tragedy through their fear and resilience as they feel the epidemic “closing in” on their community. Set in the intimacy of the Finborough Theatre, the play has a rawness, anger and honesty that grab you and hold you.

As Is isn’t easy. Hoffman’s writing is poetic, with a staccato style and wealth of graphic detail that can overpower. His incessant irony becomes a touch laboured and some references are dated. All the more credit then to Andrew Keates’ direction: he keeps up to pace with the script and adds clarity. Using the cast as a chorus, frequently left on stage to react to events and take on a variety of roles, Keates makes the most of several set pieces, from bars to support groups and telephone helplines, with some intelligent, stylised touches.

In the lead roles Tom Colley and David Poynor seem an odd couple at first, but they soon establish their characters’ shared history and manage to reflect the churning emotions experienced with a force that can make for uncomfortable viewing. Among the strong supporting cast Anna Tierney’s part as their friend stands out, as does Jordan Bernade, who plays Rich’s brother and a host of minor characters superbly.

For all this talent, As Is has a big problem – its jokes. There’s no reason any play dealing with dark subjects shouldn’t contain humour. Laughing in the face of death is common, but here those laughs seem too hollow. Some jokes fail because they are dated, a few are poorly delivered, most just aren’t funny. But the passion in the play is enough to recommend it. As a tragedy and a political statement, this work is important. As a love story in which commitment is promised unconditionally – as is – in sickness and in health, it is timeless in its power.

Written 9 August 2013 for The London Magazine