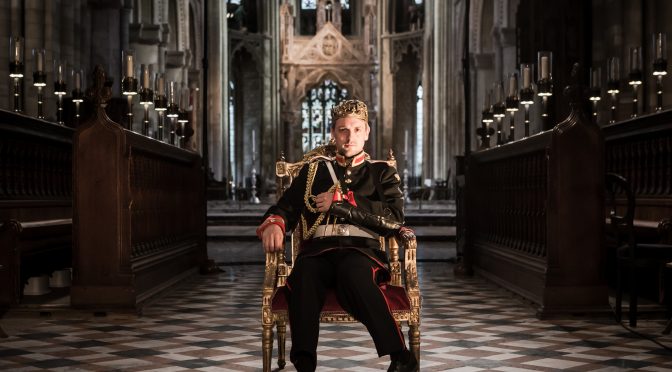 Toby Manley plays a super-posh version of Shakespeare’s super villain in Antic Disposition’s new production. The crystal- clear diction is a delight, the suave air (and a bow tie) adding to a new take on the despicable king that is well constructed and carefully delivered. The description of Richard as an “intelligencer” is the key, with Manley securing the role’s infamous charm and emanating an air that he might work for the secret service. As a double agent, of course – he’s almost your cachinnating villain at one point. And I’ve wanted to use that word for ages. Thank you Mr Manley.

This Richard makes for a great show. It’s a shame that those around him seem a little too foolish. A group of Ya Ya Yorkists, with a Noel Coward dressing gown and pearls, if not furs, are too easy to overcome. And several performances are too broad and unconvincing as a result. But Manley is frequently restrained (another reason he stands out), suggesting the Bullingdon Club with subtlety. And Jess Nesling impresses as a Queen Elizabeth who just might refrain from falling for Richard’s plans. At the opposite extreme, Joe Eyre’s exaggerated performance works well. As with Richard, his Buckingham gives the sense of power played out as a public school boys’ game.

A modern dress setting is made much of by the directors Ben Horslen and John Risebero, the latter of whom also designed the production, but their clever touches seen unnecessary. And those aiming at humour – Richmond’s yoga and the Mayor of London carrying a Starbucks cup with Boris written on it – don’t deliver. The music, composed by James Burrows, doesn’t help either, with a confusing mix, close to pastiche, arriving abruptly. The frustration is that Horslen and Risebero don’t need any of this – these guys really know what they are doing.

The cuts made to the play are sensible. The production is a model of clarity. And the doubling up on parts is well done. Although a touring company, the performers seem at home in this magnificent space and the traverse staging is handled superbly. The simple device of having Richard’s victims band together – as a body watching throughout the play and attacking him during his dream on the eve of battle (including great work from lighting designer Tom Boucher) – is spine tingling. The disparate group of those who have crossed him is led by Louise Templeton, who does fine work as spectral Queen Margaret, recruiting the dead to her side one by one. Take away some fussy touches and this is good, solid work that combines into a strong production.