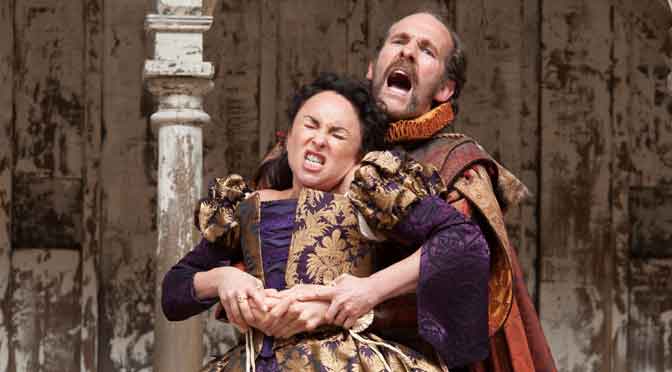 The Taming of the Shrew is surely Shakespeare’s most objectionable play: its politics can’t help offending a modern audience and its conclusion leaves a bitter taste – never a good move for a comedy. But director Toby Frow’s new production at Shakespeare’s Globe comes as close as possible to redeeming the piece. With a simple approach, Frow makes sure we don’t take the misogyny too seriously, expanding the comedy and saving the show in masterful style.

Frow, aided in dealing with the text by Samuel Adamson, adds plenty of slapstick and interjections that enliven frankly duller moments and acknowledge that few of us are up to speed with Shakespeare’s verbal dexterity. The result is two fold. The ensemble truly excels with even the smaller roles shining: Pearce Quigley’s deadpan Grumio is just one example, and the often sickly sweet lovers Bianca and Lucentio get to have a go, with superb performances from Sarah MacRae and Joseph Timms. Secondly, Frow establishes a fantastic, farcical rhythm (often quite literally – his use of music in the production is inspired) that escalates wonderfully. There’s a touch of One Man, Two Guvnors sometimes and more than dash of Carry On. And why not, if it works?

When it comes to the most unpleasant aspects of “taming”, Frow exploits the play’s dream theme and also sets up a relationship between Katherina and Petruchio that treads a fine line between feigned lunacy and the possibility of equality – this is a subtle, complex relationship underneath the broad comedy and works through the intelligence of its lead performers. Simon Paisley Day plays Petruchio in fine bombastic style, believable as the “devil” people describe him as and reducing the audience to fits of laughter. But his intended is more than a match, with Samantha Spiro putting in a tremendous physical performance as a head-butting, door-bashing Kate that steals every scene. Even if you can’t understand why anyone would want to tame Spiro’s shrew, you can still laugh along at the attempt.

Written 5 July 2012 for The London Magazine