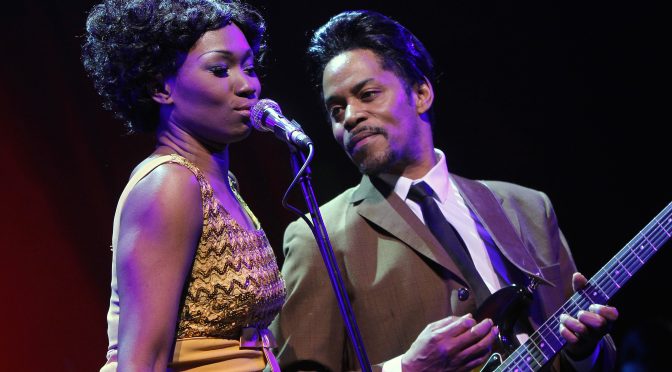 Fans of Tina Turner should hotfoot it to the Savoy Theatre to catch the limited run of Soul Sister. It’s ‘inspired’ by the life, times and music of Ike and Tina Turner, and all the hits are there, from the soul classics of the 60s to the chart toppers of the 80s, and the performances are spectacular. Soul Sister may fail miserably as musical theatre – the life and times are drearily depicted – but if it’s the music you want then this is simply the best.

Tina tells us, in one of many annoying projections that interrupt rather than add to the songs, that the stories about her and Ike only “scratch the surface”: an idea that Pete Brooks and John Miller, who devised the piece, seem to take as given and don’t desire to change. It’s a shame that with such an emotive story of rags to riches (and that turbulent love affair along the way) they make so little of the material.

Attempts to paste topics as diverse as Buddhism and women’s rights over Ike and Tina’s personal stories are unsatisfying and vaguely insulting. Worse, the production gives the cast very little chance to make a mark with its acting skills. Emi Wokoma and Chris Tummings, who take on the lead roles, try their hardest but have shamefully little to work with.

Thankfully, shortly into the second half, any attempt to tell a story is abandoned and Soul Sister becomes a true tribute act. Backed by a superb band, Wokoma can get on with singing and this she does fantastically. It’s not just a matter of the mannerisms and the big wig – it’s more the big noise that she can make. Wokoma’s vocals put heart into the evening and her stunning sound saves the night.

Written 24 August 2012 for The London Magazine