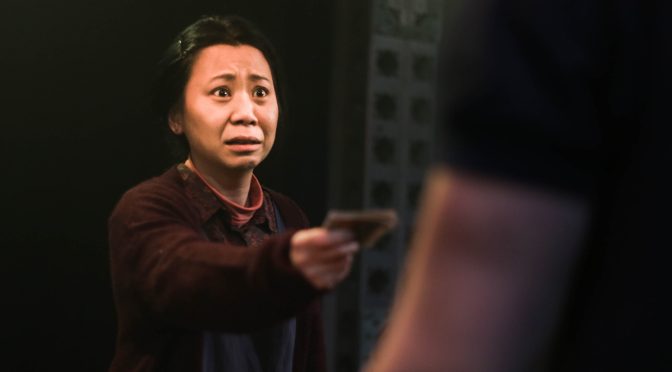 In her psychological thriller, Julie Tsang uses Chinese mythology, ghost stories and fairy tales to intriguing effect. When an unsuspecting repairman is called to an isolated house in the woods, his unusual client and an exploration into his past, combined with some psychedelic touches, are sure to hold your attention.

Tsang’s script benefits from careful direction by Jen Tan, along with fine performances from Mikey Anthony-Howe and Tina Chiang. Both luxuriate in Tsang’s poetic imagery, which makes the presence of a surrounding forest feel palpable. Ali Hunter’s lighting design goes a long way to add atmosphere – it deserves special praise as the piece could easily be one for radio (which is fine for Tsang’s future career but vaguely frustrating in a theatre).

Anthony-Howe does a good job of rooting us in the here and now as no-nonsense Kevin, whose past comes to be revealed bit by bit. But it’s Chiang’s portrayal of Li Na that’s the main point of interest. This is strangely ambiguous figure – her intentions, even her age, are deliberately confusing – and Chiang does a great job to convey all this. She moves from a frightened creature to one in control, even command. Capable of being physically threatening and then caring for Kevin, Li Na is mercurial enough that, with some creepy touches and plenty of imagination, the play’s rougher edges are smoothed over nicely.

Although the denouement may be too briefly handled, and the loose ends perhaps too plentiful, this high-quality storytelling is both entertaining and absorbing.