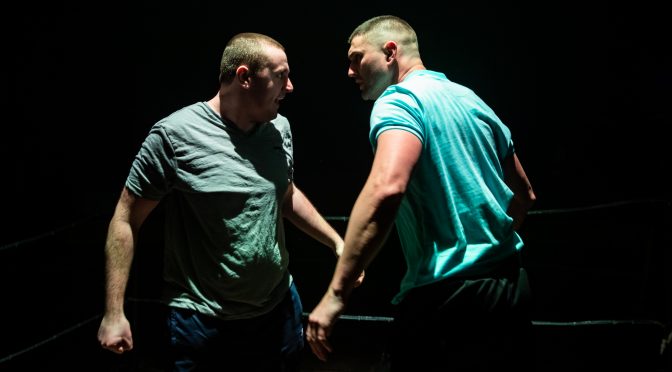 Alice Malseed’s commendable play affords a glimpse at white working-class men in Northern Ireland. It is a poetic affair that explores the dreams of two lost adults, childhood friends whose reminiscences repeatedly turn nightmarish. The games that they play, self-conscious fantasies that boredom drives them to shape together, are so obviously infantile that they add a degree of bitter humour. The neat device of role-playing enforces the prevailing tone of frustration and desperation.

These men’s lives are monotone. While lacking a mention of The Troubles, the details of poverty and boredom in a northern industrial town are checked off by rote. The men’s efforts at escapism and attitudes, particularly to drink, make for a pretty standard riff on toxic masculinity. Take the way emotions are bottled up, or that their youth is characterised by delusions of grandeur (they were once “kings”) – it’s a touch too predictable, even if depressingly accurate. And the piece lacks insight into their agency. It’s a long way into the action before accountability is raised. Thankfully, several factors elevate the slim and underexplored content. Firstly, bold imagery from Malseed, along with the structure of her play: a risky back and forth in time and reality that pays off and commands interest.

Matching an adventurous streak in the script is a strong production directed by Katherine Nesbitt. The pace is ferocious, there are moments when a pause would be welcome but the virility of the writing hardly allows this. My attendance was at a relaxed performance of the show, which makes comment on the lighting and sound design (from Timothy Kelly and Michael Mormecha) inappropriate – but intensity is never lacking. Staged around a boxing ring, a threat of violence seldom leaves the room. The two performers, Barry Calvert and Brendan Quinn, both throw themselves into the roles and grasp every moment of drama. The competitive dynamics of their relationship, the slow revelation of a tragedy that changed them both, crackles with tension. The performances, and Malseed’s poetic ear, make this a show that sounds great but perhaps says too little.