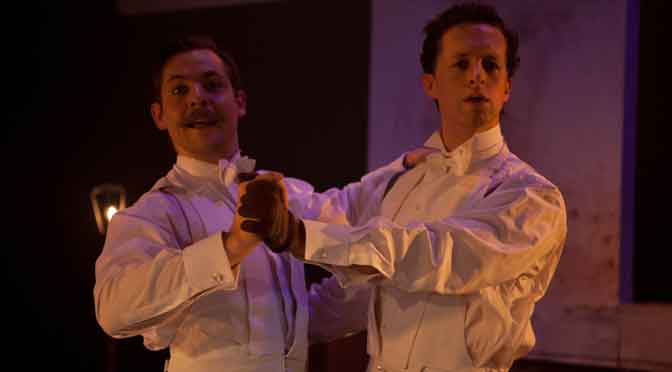 The world’s most famous Londoner has yet another incarnation in Tim Norton’s The Final Revelation of Sherlock Holmes, which opened at the Pleasance Theatre last night. A murder mystery, especially one connecting itself with Sir Arthur Conan Doyle, is surely a safe bet for a good night out and this one should help satisfy the insatiable appetites of Sherlockologists.

The action takes place in 1930 – Holmes is often a happy time traveller – and the characters are depicted with a familiarity that will please an audience in the know. Holmes and Watson are an odd couple, after all, and this old marriage-of-sorts is a ripe topic for gentle humour. It’s all done with a lot of affection and, if you suspect the script could do with some trimming, this is hardly a major crime – time spent with old friends is never wasted. The first twist: Holmes and Watson are in debt, deserted by Mrs Hudson and troubled by the prestige of their own reputations.

Holmes’ drug addiction is out of control and Watson has to scrape around the caseload history to interest The Strand in a story. A touch predictable, even in its ironic manner, but the show is carried off in style by its two performers. Nico Lennon takes the lead, undaunted by the heritage of Holmes (or, indeed, the Cumberbatch reincarnation), bringing an accomplished physicality to the role. James McGregor’s Watson is too much in the Nigel Bruce mould for my taste – but this is the stuff of after-show discussions – he’s an amiable stage presence who carries some laboured lines.

As for the mystery… that final revelation… from the greatest detective ever… the finest mind solving the perfect crime so long speculated over: well Norton knows that the build-up is the big thing. With some satisfied chuckles from the audience as the rather post-modern penny drops, you can tell he’s hit home. There’s a clue for aficionados in this review by the way. And if that gets you thinking, you’ll want to go and join in the game.

Until 2 March 2014
www.pleasance.co.uk
Photo by Daniel Swerdlow
Written 13 February 2014 for The London Magazine