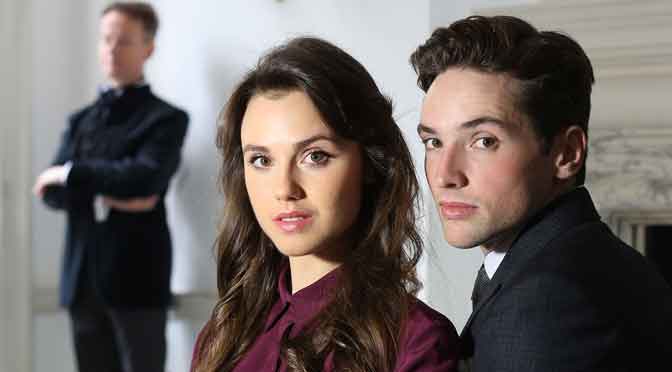 Tim Luscombe’s revival of The Green Bay Tree at the Jermyn Street Theatre offers history buffs a rare chance to see this groundbreaking and controversial play. Written by Mordaunt Shairp (great name) in 1933, the play is reported to be the first contemporary drama about homosexuality.

A love triangle between the older confirmed bachelor Mr Dulcimer and his unofficially adopted son Julian, whom he has moulded to be like himself yet who wishes to marry, isn’t presented explicitly. Instead, it is phrased as a battle of “luxury” against virtue. It’s clear enough what’s going on. There’s even a reference to men with painted faces on Piccadilly, once a notorious location for male prostitutes – and close to Jermyn Street. But, perhaps needless to say, this isn’t a positive portrayal of homosexuality so, while the play is interesting given its place in theatre history, it makes for distasteful viewing.

Luscombe’s direction is impeccable and his adaptation commendably unfussy. The set is minimal, so you miss seeing the “exquisite” room that’s supposed to reflect and condemn Dulcimer’s character. The use of modern furniture and a remote control is annoyingly incongruous in such a period piece. The Green Bay Tree is rooted in its time and place: its protagonist presented as predatory to a queasy extent and the psychology of the characters twisted by repression and class consciousness.

Richard Stirling is careful not to present Dulcimer as a victim and he has a good turn in catty lines that get a few laughs. But Stirling comes too close to making Dulcimer sympathetic; bear in mind the character paid a destitute drunkard to take away an 11-year-old boy. Poppy Drayton and Christopher Leveaux play the young lovers, fleshing out their roles well, but both their characters are annoying – one too prim, the other too weak willed.

The dilemma in The Green Bay Tree seems alien: money motivates Dulcimer and Julian’s relationship, so be it, but both are mercenary enough to admit that and the tension dissipates as a result. The angst presented – and there’s plenty of it – is performed with sincerity but the characters’ trauma seems so odd at times that it’s incomprehensible. Ultimately, the connection between homosexuality, narcissism and incest is so nasty that it overwhelms.