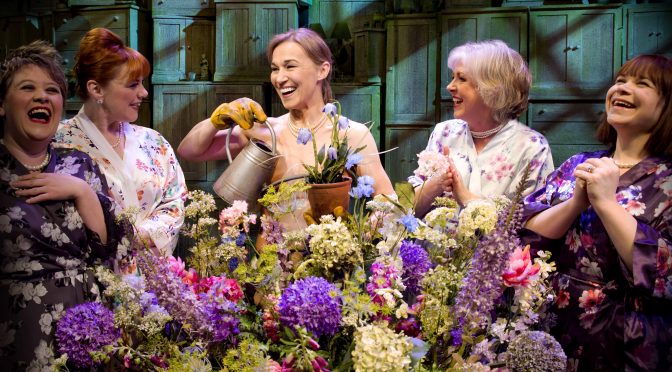 It’s right that the arrival of a new musical should be a positive, optimistic occasion. The opening night atmosphere for Gary Barlow and Tim Firth’s show was extra electric. With a crowd this committed – including the original, real-life ‘Calendar Girls’ who are the show’s inspiration making a trip to the West End – it’s hard to gain an objective impression. But it’s clear that this is a fun and engaging night out, with lots of heart and plenty of brains behind it.

Firth has already written up the story, of Women’s Institute members who posed nude for a calendar, for stage and screen. Here, the plot is simplified, which works well, and the script more youth friendly, which works less well. Big emotions arrive quickly. Annie, grieving for her husband, and her friends, led by school chum Chris, decide to raise money in his memory. They fight stuffy conventions to make this a feel-good, grown-up show that’s sentimental but effective.

As with many a British musical of late, the show removes us from London. Here, it becomes a paean for Yorkshire (it’s canny of the tourist board to sponsor the programme). The view is idealised, but the team have clearly worked closely with the community to develop the show. And, with its admiration for women of “a certain age”, Firth’s focus is on an under-represented demographic without patronising it… too much.

The cast makes a lot out of roles far from complex. In the leads, Joanna Riding and Claire Moore hold the stage and their chemistry leads to both funny and sad moments. The turns provided for other WI stalwarts are contrived and slight, but superbly performed and entertaining. Sophie-Louise Dann and Claire Machin bring strong voices to their roles, while Michele Dotrice and Debbie Chazen show off impeccable comedy skills. The finale, of the group disrobing for the cameras, takes guts, and handling it so lightly is a big achievement.

The music is a collaborative effort from Barlow and Firth. It’s an understatement that the former can write a good tune and there are plenty here. It would be too generous to say that they are memorable but all the songs are enjoyable, and there’s a nice mix of comedy and pathos. A variety of musical styles are included, somewhat studiously, and there’s a satisfying distance from any pop-song fodder. The lyrics are the best and boldest bit, basking in the prosaic, everyday details that embody the show’s down-to-earth nature and generous spirit. 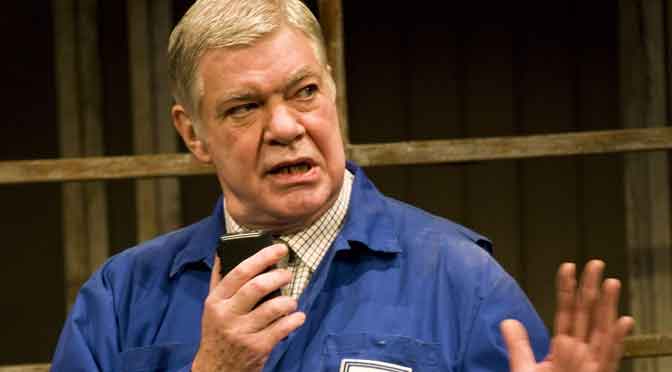 Humour and sentiment can be an uncomfortable mix. The secret of Tim Firth’s successful career, from Neville’s Island to the recent Calendar Girls, is that he combines them so well. Sign of the Times shows off this talent on an intimate scale – its heartwarming stuff with plenty of laughs.

Matthew Kelly plays Frank, Director of Installations at a sign manufacturer who is given the added responsibility of looking after Alan (Gerard Kearn) who is on work experience. Like many an intern, Alan is getting a raw deal here – he wanted work experience on the set of Emmerdale but instead is stuck on top of an office roof with a bore.

This is a comedy about a generation gap with the age-old twist of who is actually learning most from whom. Young Alan’s creativity strikes a chord with the older man, who is a frustrated writer. No matter how bad the spy thrillers he dictates during breaks are, we are touched by the sincerity of his efforts – he has a “burning burn” to write and who can argue with that! And the inspiration to do more with his life comes at the perfect time – the sign they are currently erecting spells out the end of his career.

Three years later, the roles are reversed. Alan is now the eager Trainee Assistant Deputy Manager explaining Frank’s new job to him with corporate mnemonics ripe for satire. It’s Frank’s turn to inspire and remind the youth of the courage he once had, saving him from electrocution along the way.

Sign of the Times started as a one-act play and there are moments when Firth’s extension seems contrived. Frank’s story reminds us that postponing retirement age entails problems, but that isn’t where the strength of the story really lies.

Firth writes great characters and in Sign of the Times they get the performances they deserve. Kelly is fully in control of the stage, charming even when pompous and endearing in his enthusiasm, and Kearns (who may be recognised from Shameless) makes a great West End debut. Both actors are spot on with their comic timing and make Sign of the Times well worth seeing.

Written 14 March 2011 for The London Magazine