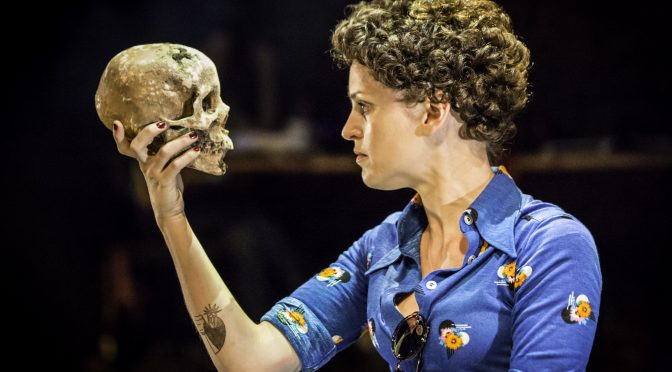 Tim Crouch’s new play, Adler & Gibb, which opened at the Royal Court last night, is an intricately layered exploration of reality and art. It’s experimental, obstinately so, and more than a little mind blowing – I confess that metaphysics always gets me a little muddled.

The framework is an art student delivering a lecture in order to secure a scholarship, where the ‘slides’ are performances from the lives of (fictional) female artists and lovers, Adler & Gibb. Actually, the actors are a film star and her coach preparing a biopic, with an eye on subsequent auction sales of the conceptual artists’ work (stay with me, here). Then comes a trip to the rural retreat of the artists, culminating in the surviving Gibb forced to rehearse a scene from the forthcoming movie… and a ‘real’ film of said artists now ruined home. Enough meta-texts for you?

As for the delivery, Crouch elaborates his fictions – this is his theme. Children take on the roles of stage managers, introducing surreal props and pretending to be animals. And to show how willfully he ignores advice about who not to work with, a real dog appears in case we haven’t quite got the point. Much of the action is performed standing still, including a sex scene. Playing with theatrical form and pushing the audience to engage makes this a demanding show. But stick with it.

Adler & Gibb is ambitious. With all the big ‘arty’ themes, opacity seems sadly predictable. But there’s a playfulness to all the pretention that is surely another irony. And it’s never boring. Full of surprises, the play builds into something lingering. A bad smell you might say – there’s certainly plenty of unpleasantness. Theorists call this the abject, the rest of us bad taste. But the point to the grotesque and absurd is clear: the slide of the megalomaniacal film crew becoming repulsive, suitably theatrical, desecrators.

Although Crouch, who also co-directs the show, is the star, it’s impossible not to admire the performances. Rachel Redford is superb as the student, Denise Gough riveting as the obsessive actress and Amelda Brown wonderful as Gibb. It is Brown’s performance as Gibb that works best – the truth about her relationship with Adler is a moving, humbling revelation. There’s much that’s puzzling about this play but one thing to be sure of, and admire, is its lack of compromise.

Written 20 June 2014 for The London Magazine