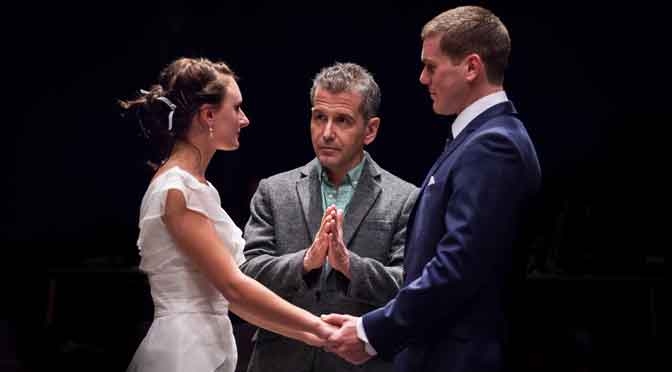 David Cromer’s production of Our Town, which has arrived at the Almeida after great success in America, is a strange night at the theatre. The play is famous in the US but, for an English audience very possibly encountering Thornton Wilder’s text for the first time, it seems an odd affair. It’s not unusual to make us aware of the fabled fourth wall that separates actor from audience but to abandon it, as Wilder did in 1938, is startling. The town is Grover’s Corners, a deliberately ordinary place with deliberately normal inhabitants, thereby challenging our ideas about what makes a good drama. And yet, despite being initially disconcerting, Our Town is a magical journey about life.

Cromer takes the part of the Stage Manager. In charge at all times, setting the scene and interrupting the action, his stage presence is vital to the success of a show that has no scenery and just a few tables and chairs. A sardonic, Garrison Keillor figure, Cromer never patronises and always demands one’s attention. The warmth of the play (which occasionally nods at the twee) glows but is carefully tempered by a sense of reportage that adds an intriguing layer.

The cast is large. The actors wear contemporary clothes and speak with their own British accents – moving us from a specific American town in 1901 into England and the present day. The demands on our suspension of disbelief, with a great deal of miming, are forceful and a connection to the generic is established. These lives are like our own – not famous or important – but nonetheless moving and worthy of attention. The performances are understated, sometimes to a fault, but care and control are evident. Kate Dickie and Anna Francolini stand out as two matriarchal figures, while Laura Elsworthy and David Walmsley give convincing performances as their children Emily and George.

So at first Our Town is all quite strange. And, given that the house lights stay up for the first act, a little uncomfortable. Dealing with ‘Daily Life’ the deliberately humdrum action starts to settle and then become almost soporific. The best is certainly to come. After establishing the scene, we move to ‘Love and Marriage’ with Emily and George’s courtship depicted tenderly and intelligently. We follow the couple through their schooldays to their wedding and, even if an ice-cream soda is involved, the balance holds between sentimentality and a colder observational tone.

And the final scene of Our Town is fantastic. As Cromer says, we guess it will be about death, but this distinctive vision of the afterlife is both painful and reassuring. A coup de théâtre is created as the newly deceased Emily, going against the advice of others now dead, returns to observe one day of her life. The scene is hugely poignant and makes you appreciate how attached you have become to this fiction. Her ‘haunting’ allows Emily to join the other residents who have passed away, now sitting resignedly in graves. While she takes up her position as an impassive watcher of life, the audience moves on, maybe altered a little by our visit to this special place.