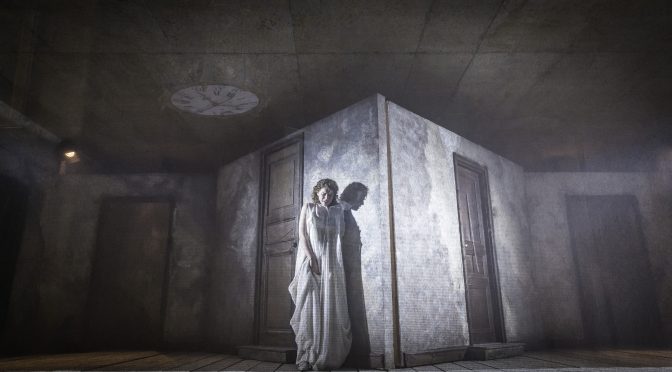 Another ‘immersive theatre’ piece, Venice Preserv’d begins at the Cutty Sark. The first part is a promenade where audience members march along the Thames accompanied by musicians and performers past bemused tourists wondering what the hell is going on. Not practised at waving a large flag and generally uncomfortable about being part of the spectacle, I had some trouble entering into the spirit of things. But others had come dressed for the occasion and, on a nice night, it was a jolly stroll. Quite a long walk, actually, into a very residential area, as the final destination is the new development Paynes and Borthwick Wharf, transformed, by our imaginations, from Greenwich into Venice.

Greenwich is often used as a location for films – it’s surprisingly versatile, and using the dramatic backdrop of Canary Wharf to parallel the mercantile Renaissance city is thought provoking. The tone of menace within the play – terrorists are threatening the city – is a tough call, though, and the carnival atmosphere seems at odds with what follows. However, director Charlotte Westenra, working with designer Helen Scarlett O’Neill, uses the still unfinished site well. Credit, of course, to the property developers United House, La Salle and Lane Castle for such an exciting project.

It has to be noted that, for all the inventive touches (getting the audience to wear cloaks, giving them lanterns and having a real go at improvised, individual action with the crowd) the most effective parts of the show don’t really need them. When you settle down into a seat, the sets are good and there is some impressive video. Venice Preserv’d is a late Restoration tragedy, a once popular work, by Thomas Otway, that’s well worth seeing: a strong script full of “power, honour, wealth and love”. The second ingredient is the key. Honour is the obsession that drives the action – which can seem odd, but Westenra’s pace and precision makes the play really entertaining.

Best of all, Westenra has secured some fine acting from her leads. Here the ‘up close and personal’ feel of the production really takes off. Ashley Zhangazha is fantastically compelling as Jaffier, torn by loyalty towards his friend Pierre, performed by Ferdinand Kingsley in an appropriately grandiose manner, and his wife Belvidera, played superbly by Jessie Buckley. Vacillating between despair at his own fortune and the state of Venice, while his wife advocates loyalty to the city, Zhangazha’s chemistry with Buckley is electric. There’s also a strong performance from Ayesha Antoine as a sexy and intelligent courtesan. All four deliver their lines impeccably – no extras are needed – and are a joy to listen to.

Written 7 May 2014 for The London Magazine