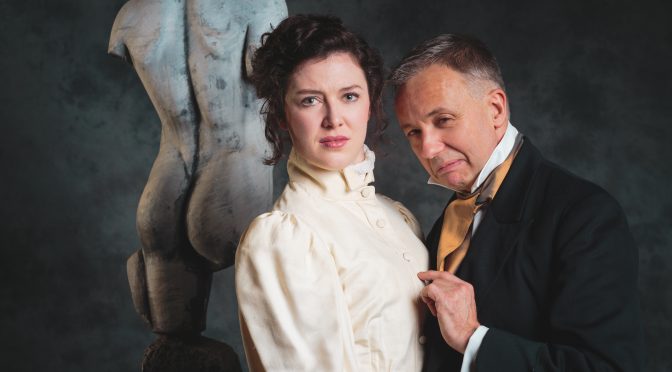 Saturday’s matinee at the Finborough Theatre saw Chelsea fans in the bar downstairs mix with operetta buffs coming to see a new production of Gilbert and Sullivan’s Princess Ida. My fears that football cheers would drown out the music were unfounded – a strong cast of singers was more than a match for the Blues.

Director Phil Willmott scores his first goal with his revision of the piece; trimmed and tidied so well that only a real purist could take offence. Princess Ida is a less popular work from the G & S canon (I’d like to think because of its old fashioned sexism) and not as funny as their best, with the satire resting too firmly in its day, but Willmott makes the work light and snappy. We have more princes trying to marry Ida, yet fewer characters overall and are missing a King. The plot is simpler and sillier.

Focusing more on courtship than courtiers, alongside a beefed up role for Ida’s father, now a guardian, the roles are a delight when they could easily have been boorish. And while I think it’s a shame our heroine doesn’t stay in the women’s university she sets up, an audience in 1884 clearly wasn’t ready for an idea like that. Cheeky changes Willmott concludes with guarantee a smile. And of course the music and lyrics are kept, if reorganised, skillfully adapted for piano by Richard Baker and Nick Barstow – anything else would be a home goal.

Like many musicals on the fringe, miraculously, Princess Ida doesn’t feel small. With a cast of 14 on the tiny stage, Thomas Michael Voss’ choreography is a marvel. Willmott’s revisions make it feel like there are no small parts here, but Bridget Costello and Zac Wancke sound especially sweet in their ballads. For the hat-trick Simon Butteriss has to be singled out as his experience with patter really shows – his deliciously lecherous villain is worth every word. I don’t know the result of the football match, but this Princess Ida got my cheers.