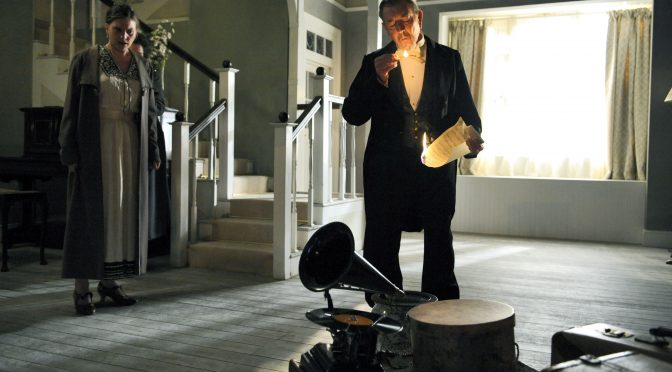 Thomas Heywood’s 1603 domestic drama, A Woman Killed With Kindness, has a fair claim to still being relevant; family fortunes and adultery are great topics for drama. Nowadays, not many would contemplate the solutions for debt or infidelity Heywood’s characters come up with but Katie Mitchell’s bold production at the National Theatre makes it a fascinating night.

This is a story of the gentry; Heywood’s subjects hadn’t been seen on stage before, they are neither the great and the good nor the lowest in society. But confusingly, designers Lizzie Clachan and Vicki Mortimer present two well-off households next door to one another – giving the impression this is a troubled terrace, a kind of grand Coronation Street, when these are really two country estates.

The staging means that Mitchell can draw parallels between the women in the two stories; characters echo each other’s actions, creating an intense stereoscopic experience that is surreal and unnerving. It is continually arresting but never fully believable.

Mitchell moves the action to 1919. The stiff upper lips adopted by the nobility fit oddly with the passion so obvious in Heywood’s text. Homespun honesty is provided by an ensemble of solicitous servants (Gawn Grainger’s laconic Nicholas stands out) but their relationships are surely more feudal than the upstairs-downstairs setting suggests.

Heywood’s naturalism is acknowledged with lots of action off-stage, yet for all Mitchell’s previous ‘collaborative’ work with actors, the cast struggle against a touch of Grand Guignol. There are great performances from leading ladies Liz White and Sandy McDade, who use the extra time on stage created for them by the design well, but even they sometimes appear like puppets directed from above.

Mitchell is a director with such a strong vision she seems in competition with the author. And yet maybe that’s what the play needs: A Woman Killed With Kindness can be objectionable and Heywood’s morality perverse. It’s thrilling to hear the heroine grab the last line – it really seems to belong to her, although Heywood’s text has her husband say it. Mitchell’s version is more chilling and complex, and at times almost manages to convince.

Written 20 July 2011 for The London Magazine