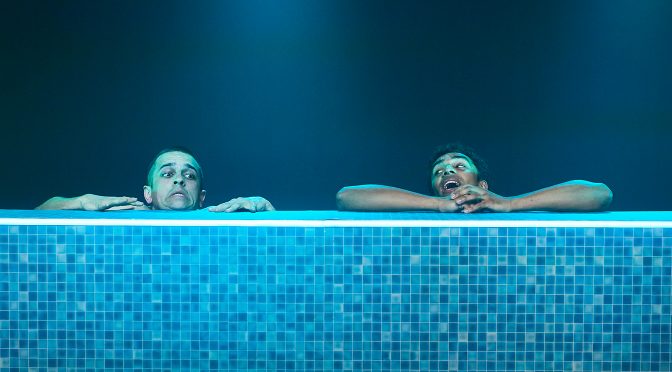 Karim Khan’s play deserves the acclaim it received at this year’s Edinburgh Festival and it’s easy to recommend seeing this London transfer. The story of two school friends learning to swim so that they can attend a pool party starts out charming, takes on the issue of racism boldly and has a big sting at the end.

The play serves as an excellent showcase for the talents of Anish Roy and Varun Raj, who play Mohsen and Kash respectively. Both boys are smart but very different – the performers show this skilfully. Kash’s bravado means Raj can bring some humour to the show, while Mohsen’s sensitivity and diffidence are clear from Roy’s performance. There are laughs, ahhhs and a real sense of getting to know these guys.

The friendship is endearing and makes a clever vehicle for showing the everyday racism Khan investigates. It is heart-breaking to see how teenage insecurities are enhanced by stereotyping. That prejudice infuses their lives is clear to both characters, and their discussions on how to deal with it provide engaging arguments. Khan’s highlighting exclusion – how that engenders privilege – is instructive.

The accomplished script is matched by an excellent production. John Hoggarth’s direction has bold moments that create the sensations of swimming in a poetic fashion. And the show is paced perfectly, allowing time to breathe between some very short scenes. The lighting by James Bailey is excellent at complementing quick changes of setting and tone, and James Button’s design is exemplary – a simple set with two benches that takes us to mosque, gym, bus and, of course, swimming pool.

As for the twist at the end of Brown Boys Swim, I don’t want to ruin it. But a cruel revelation brings home the affection between the boys and makes a case for how deep the consequences of racism are. Khan, like his characters, has an eye on the future that makes the ending of his short play painful but sure to live long in the memory.