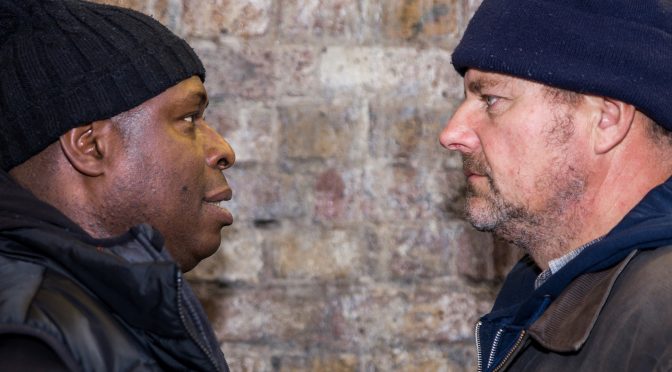 This well-intentioned piece, written by Cliffordkuju Henry, is hampered by its brevity.

The scenario is simple but effective: two childhood friends, Mikey and Patrick, are reunited in a police cell, arrested after taking part – on opposite sides – in a protest about race.

The subject matter is rich and important. Having middle aged protagonists provides an interesting perspective. And the characters’ demographic – the script was originally part of a Working Class Season – is one that attention must be paid to.

Regrettably, problems arise with the white character of Mikey. While the anger here is convincingly portrayed by Drew Edwards, it is monotonous and depressingly predictable. It is too difficult to have any patience with Mikey or to find him interesting.

Henry does try to explore the root of Mikey’s frustrations. Indeed, both characters share troubled backgrounds. But both are too ready and open with explanations for their life choices. Soul searching arrives too quickly and isn’t given enough time to develop.

The role of Patrick, performed by Henry, is more nuanced. The character’s life-long fear of racially motivated violence is moving. And both performers are aided by Victoria Evaristo’s direction. The camera work is sophisticated, providing variety and rhythm.

Unfortunately, the camera cannot hide that Patrick, dramatically speaking, is a source of frustration. Admittedly, arguing with Mikey would exhaust anyone, and his shouting hurt their ears. But surely presenting a few facts about racism is what the character, and this drama, needs?

Henry has difficulty ending his too-short play. A suggestion of reconciliation is dramatically unprepared and subsequently unconvincing. Although I wouldn’t mind seeing another meeting: more is very much what In Search of a White Identity needs.