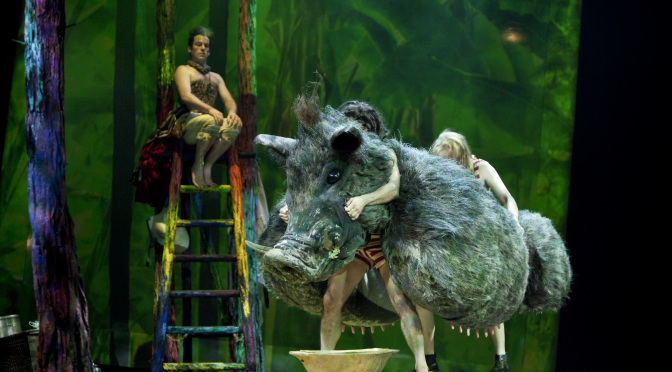 Terry Pratchett is one of the country’s most popular authors, with as good a claim as any to being a National Treasure.  A great story teller, full of engaging ideas, he is also very funny.  He is a writer often inspired by imagery, who creates bold, vivid pictures for his readers.  In short, a writer who offers great opportunities for a translation to the stage.

So it’s a baffling disappointment that Mark Ravenhill’s theatrical adaptation is so awful – it seems to perversely avoid all those factors which make Pratchett so successful. Ravenhill has reduced Pratchett’s ideas to the level of parody and made them so simplistic they seem pointless. He has taken away any sense of irony which leaves the work painfully unfunny.  Above all the adaptation is confusing.

Director Melly Still does little to clarify and has her cast running around and shouting quite indiscriminately, apparently just to make lots of noise. Caught in the middle of this adaptation and direction, the cast itself struggles to make any kind of mark.  Gary Carr plays Mau, the last of his people, and Emily Taaffe Daphne, a girl shipwrecked on his island.  Although both perform competently and the material is available for complex roles their journey of discovery fails to engage.

The rest of the large ensemble seldom manage to create distinct personas resulting in little dramatic impact. Given this lack of tension, it is no surprise that the production also has little emotional impact.  One scene, strongly reminiscent of Coram Boy, shows a newly born child in danger of starvation.  What could be poignant and challenging is too quickly resolved in a garbled manner involving the ridiculous milking of a wild boar. Both baby and boar are puppets and it is disappointing that after the success of the National Theatre’s War Horse these create such a poor effect.  With no emotional investment in these creations they are simply there for the spectacle.

Spectacle, the production does have in abundance.  Projection combines with ambitious sound and lighting to recreate, amongst other things, a tsunami.  However, simple mistakes have been made by Still, this time working alongside set designer Mark Friend.  Sightlines at the extreme left of the theatre are severely restricted – something very difficult to achieve in a space as well designed as the Olivier.

To save the worst until last, Adrian Sutton’s score is truly awful.  It seems to embody many of the production’s faults.  Adding nothing to the drama or pathos it is confusing and never rises above parody.  As the production draws to a close it slides into extreme sentimentality.

A defence for many of these decisions could be argued by claiming that this adaptation is essentially for children – but children’s theatre can and should challenge its audience.  It is a irony that nowhere knows this better than the National Theatre, given its superb record of previous productions. But like the rest of the audience, children here will learn little about the questions that surround the ideas in Nation.  With so many problems and mistakes, the dominant question becomes what on earth is going on at this Nation’s theatre.

Written 30 November 2009 for The London Magazine