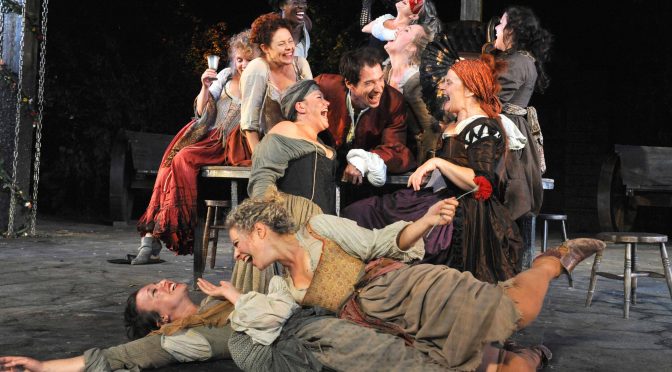 It’s hard to underestimate the success and importance of The Beggar’s Opera. The influence of John Gay’s satirical ballad opera is so enduring that viewing is essential for theatre lovers. As Londoners we are further obliged to attend: the premiere production paid for the construction of the first theatre in Covent Garden and the work teems with references to home that Londoners will love.

In Regent’s Park Open Air Theatre’s production, 18th-century London is masterfully evoked by William Dudley’s ambitious set. The park is cast as a pleasure garden, the criminals’ party in the shadow of Tyburn: the gallows are garlanded, the maypole formed with chains, but Newgate is only a cart ride away.

The stage is set so well that the story of love and dishonour amongst thieves speeds along. Bigamy and betrayal, awash in the ‘strong waters’ of gin, mean fists are always at the ready. Praise must be given to those often ignored in reviews – the movement and fight directors, in this case Maxine Doyle and Terry King – whose work with this Hogarthian epic never distracts from Gay’s dictionary of abuse. ‘Beggars’ is such a delicious catalogue of invective that it makes you wonder if we have lost the art of the insult.

The cast is as rude as can be. David Caves’ Captain Macheath is convincing as the sensual highwayman and Flora Spencer-Longhurst is refreshingly full blooded as Polly Peachum. But for sheer sauce Beverly Rudd steals the stage as Lucy Lockit.

Rudd is in fine voice – important since The Beggar’s Opera is essentially a musical. Director Lucy Bailey makes the laudable decision to use selections of the original score, performed superbly by The City Waites on period instruments, yet what should be the focus of the show seems like an addition.

Bailey is such an intelligent director that this reservation can be cast aside. Steeped in satire that still feels fresh, Bailey’s take on the highwayman as a celebrity makes her finale riveting and shows her understanding of this genre-busting work. She makes the importance and success of The Beggar’s Opera easy to understand.

Written 30 June 2011 for The London Magazine