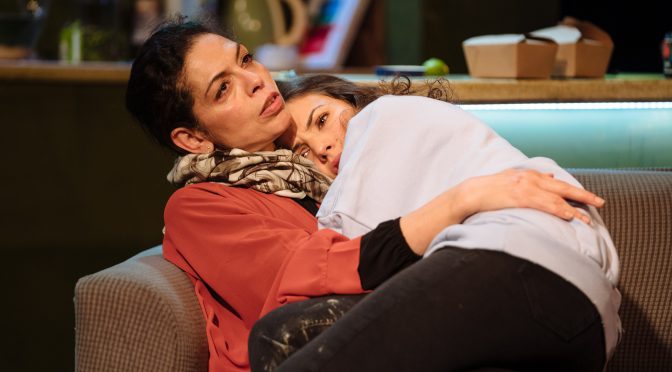 As winner of the International Playwriting Award, the figures surrounding Danusia Samal’s new work are impressive – it was selected out of 2,055 scripts from 49 countries. While judging so many plays must be hard, it’s easy to see why the panel chose this one. A firmly rooted story of modern London life, with drama from the dilemmas facing a young Muslim woman caught between “two worlds that do not mix”, Samal balances humour and pathos with skill and assurance.

It’s clever that our heroine Zara, impeccably performed by Nalân Burgess, isn’t entirely sympathetic. Zara’s parents, from whom she hides her Westernised life, deserve more from her. They are, at best, a source of fun for Zara and her flatmate, Alice, another satisfying part that’s developed well by Emma Denly. Samal presents Millennials that are easily recognised, maybe a little too harshly judged and good fun. There are scene-stealing lines, too, from younger sister Fatima, a role that Oznur Cifci makes her own, confirming Samal’s comedy skills.

The writing often shows an impressively light touch that director Tanuja Amarasuriya handles well and uses to counterpoise the play’s big themes. For, alongside considerations of race, immigration and class, it becomes clear that Zara’s problems aren’t just a clash of cultures. Some home truths from Alice’s boyfriend (a role that, like Zara’s father, falters compared to the women, despite the actors’ commendable efforts) leads to a homecoming that brings a focus on mental health issues. The plotting may not be sophisticated, the action is possibly rushed, but Samal’s leading characters are beautifully crafted and utterly engrossing.

Out of Sorts comes back to the conventional family – a traditionalism that Samal brings to sympathetic fruition in a detailed two-hander finale. Here’s a moving scene that gets the best out of Myriam Acharki as Zara’s mother, who shows hidden depths. It’s no surprise Samal is a performer herself – she’s written enviable roles that really sing. If the conclusion shows a cautious streak (and as a choice of competition winner the play itself is a conservative choice), Samal’s skills are clear. Remember that safe bets pay off.