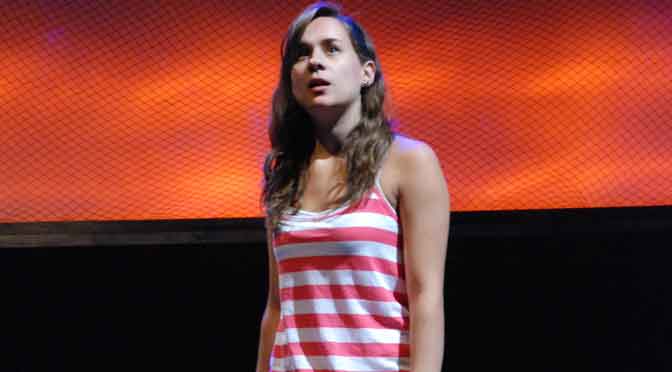 A big success at the Edinburgh Fringe, Our Share of Tomorrow has arrived in London, to the Theatre 503 in Battersea. The piece, written and directed by Dan Sherer, comes from the Real Circumstances Company, and has a trio of characters mourning for loves lost.

Real Circumstance aim for ‘new ways of playmaking’; their rehearsal process develops the content of the play with the cast, includes improvisation and works towards a final text that has poetic ambitions. The process results in a particular kind of emotional realism from the characters we see on stage.

Cleo is grieving for her mother, journeying to meet a man who doesn’t know she is his child, and befriended by a father figure estranged from his own daughter. The dramatic potential is potent, the commitment from the cast so clear, the result is peculiarly intense. Tamsin Joanna Kennand gives a moving performance as a fragile youngster, and is joined by Jot Davies and David Tarkenter, who both possess a fantastic raw energy.

Some extra touches, such as undertones of sexual abuse, are a little overblown. And the structure of the piece, moving back and forth in time, adds less than it should to the character dynamics. But the work as a whole has a beautiful economy, exemplified by James Cotterill’s fantastic design, and an admirably swift pace that makes it compelling.

Written 20 June 2013 for The London Magazine