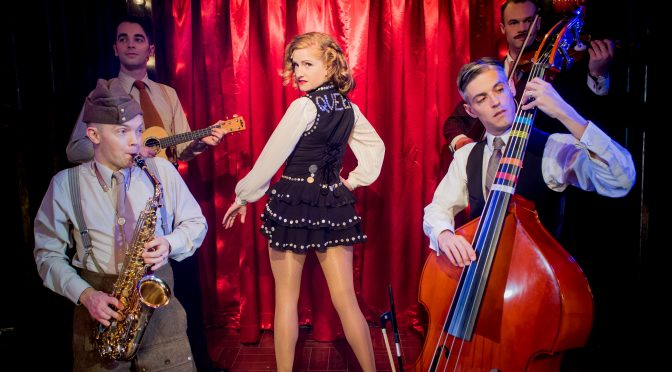 Previous incarnations of Matthew Bugg’s musical, set in wartime London, have already received acclaim and this hard-working show deserves its extended run in the capital. With a spirit of utility, the tried and tested device of a cabaret interspersed with behind-the-scenes action is employed with good songs and an affecting story.

There’s a slightly confusing mix of musical styles, but Bugg’s compositions are impressive. Pastiche music-hall numbers, catapulting the show’s titular star to fame, have a nice line in naughty. That one of them is called ‘The Sausage Song’ probably reveals enough. Can you have too many soldiers standing to attention jokes? Probably, but I smirked from ear to ear anyway.

The comedy numbers are aided by a sterling performance by the multi-talented Tamar Broadbent. She gets a lot out of the innuendo with some drag king touches thrown in. The role is stock “formidable” Northerner, and yet Broadbent makes this Miss a hit – think Sally Bowles from Sheffield. It’s easily worth sitting through an air raid just to watch her.

Other music is more adventurous, with gambles that don’t always pay off. There’s a “bit of Berlin” from song-writing émigré George and numbers that reflect the drama of his relationship with the impresario promoting Miss Nightingale, Sir Frank Worthington-Blythe. The men’s love story get equal billing with our on-stage star (connections are intimate in several ways) – for Bugg provides plenty of story to accompany the songs.

Emotional impact comes from the romance – a story of gay cruising in the blackout and blackmail threats that are heavy on history. Conor O’Kane has a tough job as George, since the role has hysterical touches and isn’t free of stereotyping. Nicholas Coutu-Langmead is appropriately “dashing” as posh war hero Frank, a much fuller character who struggles with his sexuality (not one but two good numbers here) and is especially impressive when angry. Both men sound good, and a bold duet – ‘Waiting’ – is a third highlight.

The plot has holes, several around the villain of the piece, ably performed by Niall Kerrigan who needs a solo number added ( and, given Buggs’ talents I’d guess one exists and has been cut). Another issue is that while the songs are great the score doesn’t coalesce into something bigger. The tension between its central character and gay love story isn’t squared satisfactorily. But that’s also the charm of the piece – the messy ménage-a-trois here is satisfyingly complex and shouts its modern sensibility proudly.