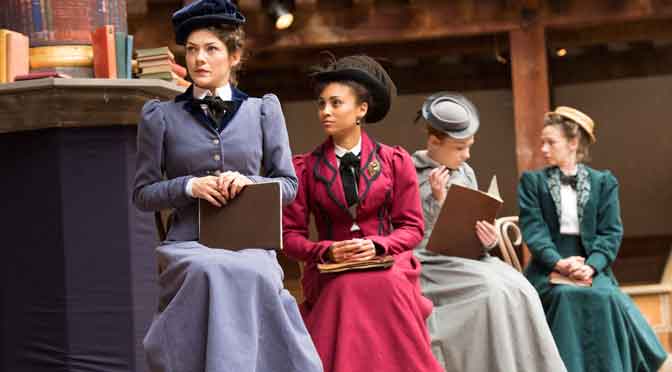 Education is, quite rightly, always a hot topic. While our own universities face many problems, even basic schooling is still denied to many around the world. With this in mind, Jessica Swale’s new play, Blue Stockings, which opened at the Globe Theatre last night, serves as a first-class tribute to those who fought for women to be able to graduate from Cambridge University.

On the brink of the 20th century, four young women and their tutors at Girton College are our heroines. Their determined pursuit of knowledge might have made them a little pious, but this is a jolly bunch, especially Tala Gouveia’s fur-clad, cosmopolitan Carolyn. What with that “modern miracle of engineering”, the bicycle, and that classic “French folk dance”, the Can-Can, there is plenty of fun to be had among all the inevitable (and occasionally portentous) discourses about the virtues of art versus science.

If £9,000 a year in fees puts some off university nowadays, the cost to these pioneers was different. Swale unfolds the price they paid gradually, and by the end we’re pretty hooked. The struggles of the college staff, played superbly by Gabrielle Lloyd and Sarah MacRae, and the sacrifice of ‘respectability’, is presented commendably. A disarmingly sweet love story for the lead role of Tess (wonderful Ellie Piercy) shows that a woman with an education was an isolated oddity, deemed a danger both to herself and to society. As the vote to allow women to graduate approaches, the tone darkens and events become disgracefully violent.

Appropriately enough, you’ll probably learn a lot from this play. These proto-feminists fight a tactical battle of ”patience and stealth”, forced to shun the suffrage cause in case it taints their demands. It’s only a shame that themes of class aren’t also developed, especially given a strong performance from Molly Logan as a poor scholar obliged to return home to look after her family. The play seems comfortable trapped in its period, using outrageous prejudices for comic effect; chaperoned silliness is performed well by Hilary Tones, but is overplayed.

Credit is given to the male tutors who taught at Girton (to the detriment of their own careers) but the many men in the piece otherwise come off poorly. And rightly so. Their two-dimensionality may be cartoonish but it serves a purpose — to enforce a connection with a contemporary audience. After all, Blue Stockings is also about the fight of an individual against the majority. The play graduates as a passionate plea for personal freedom, and its shocking conclusion shows just how long it has taken us to get where we are today.

Written 30 August 2013 for The London Magazine