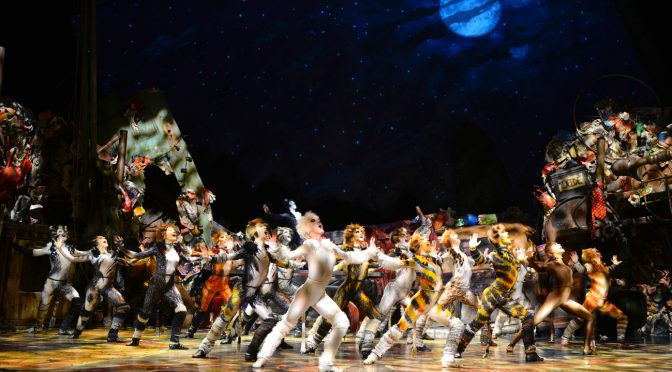 As if its original run of 21 years weren’t enough, Andrew Lloyd Webber’s musical has added on a few extra lives this year at the Palladium. For the newest instalment of the revival, Beverley Knight follows Nicole Scherzinger and Kerry Ellis as Grizabella, providing some star appeal. Knight is a superb performer and feels a little wasted in the role, but she gives a strong interpretation of perennial favourite ‘Memory’ and provides as good a reason as any for checking out the show.

A lot of people dislike Cats because it doesn’t have a story. Combating this prejudice is futile. T S Eliot’s poems merely provide Lloyd Webber and choreographer Gillian Lynne with a platform for song and dance numbers. Directed by Trevor Nunn, the whole show runs like clockwork and is an entertaining spectacle. The dancing is top notch – it’s hard to believe these guys are the same species as the rest of us (especially Mark John Richardson’s Mr. Mistoffelees). And it’s nice to see care taken to include the audience in the stalls, as the cats prowl amongst the crowd, delighting any kids you take along.

And yet the piece has aged badly. These days we’re used to musicals with a knowing edge and Cats comes close to taking itself seriously, it’s so doggedly humourless. These crazy cats have some hippy ideas about their Jellicle tribe meeting for a moonlight reincarnation ritual, led by the god-like Old Deuteronomy, and it all comes across as just spaced out. The music feels lost in the late 1970s with tinny electronica and rock guitars (as for the updated rap version of Rum Tum Tugger, it seems only polite to gloss over it). While admittedly catchy, the songs are reprised too frequently and the show feels desperate for praise. This is a score that should be rescued and put in front of the fire with a nice saucer of milk.