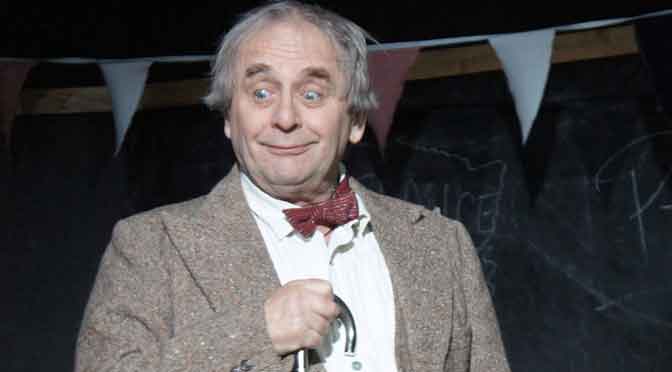 Decline and Fall is Evelyn Waugh’s first published novel. A riotous farce, heavy with satire, it follows the misfortunes of Paul Pennyfeather, whose relationship with the “much maligned” Lady Fortune is decidedly tangential. In Henry Filloux-Bennett’s adaptation, Waugh’s humour is given a surreal spin that adds to the comedy and creates an entertaining evening’s theatre.

Richard Kent’s design unites the worlds the hapless Paul suffers in: the college he is sent down from and the schoolroom he teaches in. The desks also stand in for his fiancée’s modernist house and, finally, the jail he is sent to on erroneous charges. Tom King’s direction controls the fun and the cast injects some inspired improvisation. From the beginning, the audience is asked to join in – this is a classroom you don’t want to be late for!

Waugh himself said that he had no technical psychological interest but that drama, speech and events obsessed him. This approach makes staging his work entertaining, but actors face the tricky task of dealing with characters that seem one-dimensional. King and Filloux-Bennett’s solution is courageous – they emphasise the slapstick and their cast embraces the strategy.

Sylvester McCoy is the star of the show, bringing his captivating eccentricity to the role of the drunken Captain Grimes and then the prison’s misguided warden. But it is the women who truly excel. Fay Downie plays Mrs Beste-Chetwynde as a wide-eyed flapper who might burst into song at any moment. Emily Murphy brings her considerable comic skill to the role of Florence Fagan, the headmaster’s autistic daughter. Combining this role with that of Lady Circumference (one of the those women who regard all athletics as an inferior form of fox hunting) is inspired.

The hardest role is the lead. Pennyfeather is a man who merely witnesses events; he doesn’t act but is acted upon. Michael Lindall performs this unrewarding role with appropriate modesty and spot-on comic timing that serves the production well. He masters a perplexed look that means you can’t help warming to him.

Pennyfeather’s eager dash to France to please Beste-Chetwynde is a lovely touch. Reappearing with beret and onions after a brief soundtrack of running feet and airplane propeller, it encapsulates this production’s anarchic streak. Any adaptation is a brave endeavour; you have to trust to the Lady Fortune that Waugh’s characters refer to – but she has done well by those at the Old Red Lion Theatre.  If you see Decline and Fall, chances are you will end up joining in with the cast and raising a glass to toast her.

Written 6 December 2010 for The London Magazine