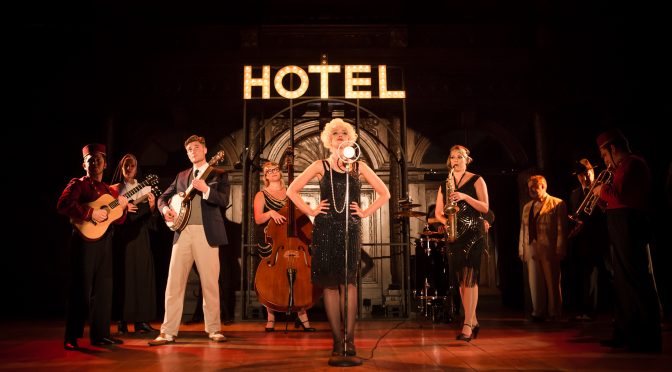 Antic Disposition’s coup, of staging its new piece in this historic banqueting space, is just one good reason to see this show. This is the very venue Shakespeare’s lightest comedy – with its two set of twins causing havoc through repeatedly mistaken identities – is first recorded as having been performed in (check out the Tudor portraits on the back wall). But the production has further merits. A spin is provided by Some Like It Hot, Billy Wilder’s film, with action set in a hotel. The Dromio characters don bellboy outfits, the Duke is a gangster and there’s a band thrown in. You certainly get your money’s worth.

It’s a cast of actor musicians led by a Marilyn Monroesque courtesan (Susie Broadbent), which adds immeasurably to the show. I’d happily have heard the numbers for longer. Delivery of the lines is a touch slow on the part of joint directors Ben Horslen and John Risebero. Maybe there are too many ideas crammed in? The action is speedy, though, with lots of madcap running around. And there’s a nun with a ukulele – never a bad thing. Smaller roles blossom: Doctor Pinch becomes a magician performing at the hotel (Philip Mansfield is the beneficiary of this role) while the merchant (that bit with the gold chain that can drag on) is rendered gloriously shrill by Paul Sloss – the character is described as a “shrew” so why not.

The leads are athletic, with both Antipholus roles even looking alike: William de Coverly and Alex Hooper dash about full of righteous indignation and further impress by hinting how their characters’ different life stories would have made them very different men. In the servant roles of Dromio, Keith Higinbotham and Andrew Venning get even more laughs, vying with one another for the comedy edge. I’d suggest Higinbotham wins – by a chin strap – if only because Venning labours his funniest scene (although his trumpet playing is superb).

Ellie Anne Lowe holds her own against this male quartet, amiably aided by Giovanna Ryan. There’s less attempt to adapt these ladies of Syracuse, but the roles are well thought out. Love is the theme, after all there are three married couples at the end, and Lowe makes her marriage convincing. If the whole production is more romantic than raucous, it’s a fair price for such charm.