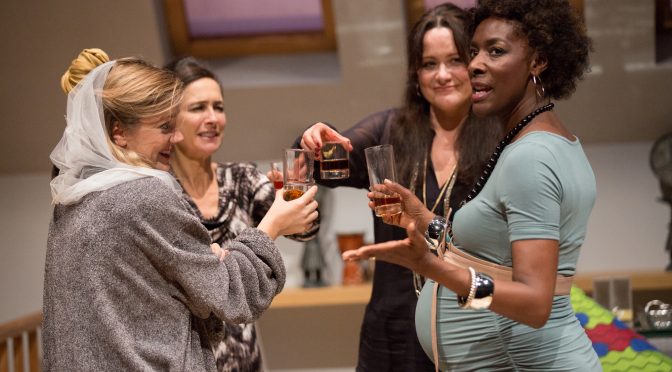 Adult Supervision, a new play from first-time writer Sarah Rutherford, opened at the Park Theatre last night. When Natasha holds a gathering on the night of Obama’s election victory, planned to unite “mothers of children of colour” attending the same private school, the evening turns predictably sour. The tensions of motherhood and racism are quickly revealed and discomfit the middle-class protagonists and the audience at the same time.

An actress herself, Rutherford has written four fantastic roles for women. Natasha is a ridiculously uptight former lawyer who has renamed her adopted Ethiopian children to make them sound more exotic – a word she really hates. Happily, Susannah Doyle rises above cliché in the role. Her unlikely friend, the dizzy Izzy (the wonderful Olivia Poulet), attends for moral support, even though her children are Caucasian. Much of the tension is woven from the fact that the heavily pregnant Angela is black, married to a white man. Finally we have Mo, a dangerously down-to-earth woman who is far too frank for her surroundings. The latter parts, played with substance and wit by Jacqueline Boatswain and Amy Robbins, are, painfully, easily recognisable.

The play isn’t as funny as one billed as a comedy should be. There are laughs but, despite the women reminding us that “this is supposed to be fun”, pacing sometimes goes awry despite the efforts of talented director Jez Bond. You see this problem again with some enforced craziness – dressing up as a virgin bride and experimenting with lesbianism – that do not convince. Fuelled by improbable amounts of booze, many of the faux pas are a step beyond the credible. The Freudian slips are better, but the majority of humour comes from the performances rather than the script. Doyle and Paulet are particularly strong here.

Rutherford is best when she approaches darker ground: questioning assumptions about racism, including that directed towards the white community, joking about a “multi-racial mafia”, or showing convincing anger at a complacent “bubble” that denies the problems altogether. These are brave moves, with Robbins and Boatswain injecting wholly credible passion. Combined with the compassion the women show each other, despite screaming at one another plenty, there’s a maturity in the writing that makes up for a somewhat pat ending and bodes well for the future.

Written 11 October 2013 for The London Magazine