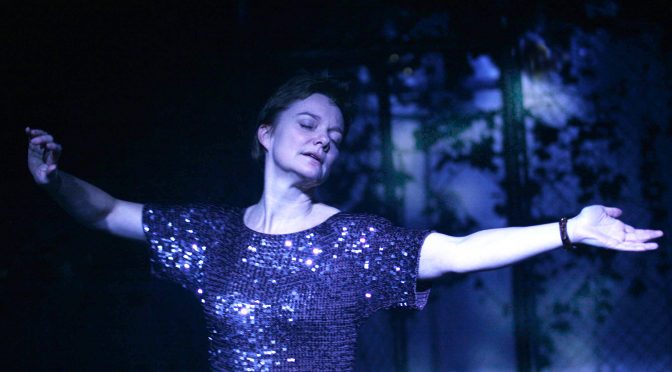 For their second production at London’s new theatre, The Print Room, artistic directors Lucy Bailey and Anda Winters have chosen Alan Ayckbourn’s 2002 play Snake in the Grass. It’s a delightfully dark romp involving murder and a haunted tennis court, and the strength of this production confirms that London has an unmissable new venue on its cultural scene.

Bailey directs and deals with Ayckbourn’s black humour in a speedy, efficient fashion; she gets the laughs and spends time on the moving revelations that haunt the characters and give the play its real bite. With the audience sitting like spectators on either side of William Dudley’s spectral, derelict tennis court we are ready to watch a deadly game.

And the cast is equally compelling. Susan Wooldridge plays Annabel. Returning to the UK upon the death of her father, she has to deal with blackmail and an estranged sister who “accidentally” overdosed her father and pushed him down the stairs. Wooldridge is utterly convincing as a disappointed, yet practical woman. When she deals with her sister Miriam’s distress by waving a conciliatory handkerchief as if to shoo her away, you can tell that every movement in this performance is under control.

Sarah Woodward takes on messed-up Miriam with similar intelligence. Described as the gentlest of creatures but also criminally stupid, nobody really knows Miriam and Woodward plays her character mercurially. As for the blackmailer, Mossie Smith’s Alice is delicious to watch as she threatens the sisters and suggests their plans to move to Fulham be abandoned in favour of a caravan park!

Snake in the Grass isn’t just one for the die-hard Ayckbourn fans. With Bailey’s fantastic production getting the most out of the play, it’s game, set and match to The Print Room.

Written 15 February 2011 for The London Magazine