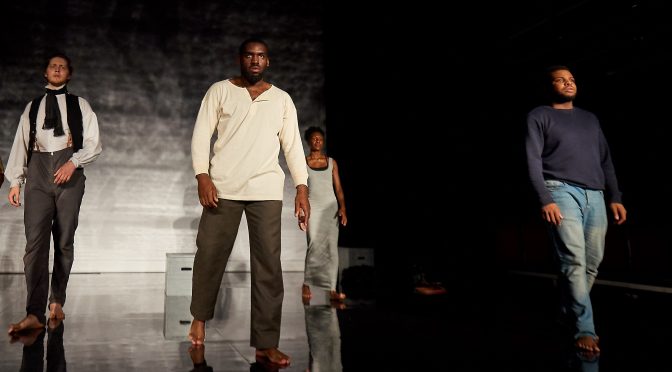 Mental health and criminal justice are big topics. Add racism, then try to explore the links between all three, and any endeavour risks overreaching itself. To avoid this danger, the intelligent approach from the Strictly Arts Theatre company is a documentary one that benefits from unwavering intensity. Freeman presents facts – painful and disturbing – in a furious fashion.

The show’s ambition is all the more remarkable given that it takes in 200 years of history. Centring on the story of the first African American who pled insanity for a crime, we see cases where the care of those suffering from mental illness is exacerbated by racism right up to the present day. Presentation is the key, tightly controlled by director Danièle Sander and executed with conviction by an amazing cast. The text, devised with writer Camilla Whitehill, is full of calm moments, contrasting with a physicality that is often frightening. There’s a lot of dance – movement encapsulates violence and death – with clever lighting and subtle projections.

Williams Freeman, who gives the play its title, was a 19th-century slave who was wrongfully imprisoned and beaten so badly in jail it brain damaged him. Corey Campbell takes the part with skill, retaining sympathy despite the horrific, literally insane, revenge Freeman took on an innocent family. Freeman’s defence argument was based on the Daniel M’naghten rules, and the point is made that such a consideration was offered to a white man first. Taking on the M’naghten role alongside that of Freeman’s lawyer (and various other racists) gives Pip Barclay the chance to shine.

Acting as a litany for six tragic figures, with each story the whole cast responds as a team, playing smaller parts or using their bodies as props. It seems important to name the other four, too. The story of Sandra Bland is performed by Kimisha Lewis, who conveys the escalating situation of an arrest marvellously. And Michael Bailey, David Oluwale and Sarah Reed form a trio of British sufferers of poor mental health, each portrayed with finesse as well as passion by Keiren Amos, Marcel White and Aimee Powell. If there’s a fault, these other stories aren’t given enough time. The show comes in at under an hour, while each could justify a whole play. More detail is often called for. Freeman is effective, moving and informative, but it would be good if there were more of it.