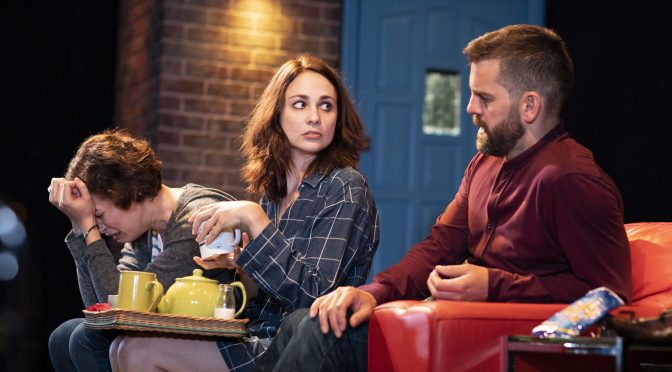 While this revival of Vicky Jones’ 2014 play may well offer insight into fast-evolving sexual politics, a piece this strong needs no excuse to be staged again and again. This intelligently written relationship drama is as funny as it is dramatic – and remarkably brave, as well as frank, in addressing the power dynamics between those in love.

Harry and Jo’s affair serves as the battleground to examine some pretty dark fantasies and fears. It would be too easy to say they are dysfunctional; even though we are provided with a foil in Harry’s besotted friend Kerry, expertly depicted by Julia Sandiford, presented as the woman he should really be with. Though they’re viciously cruel to one another, playing with the vulnerabilities partners know most about, we believe that Harry and Jo believe that their love is “above the rules”. And we come to pity them for their “kind of funny, kind of sad” state.

Jones is careful to make this conflict between man and woman even handed, it would make pretty poor drama otherwise. But Harry is not a likeable figure. While not a stereotype, his sexual hang-ups are tiresomely predictable and his mansplaining is fuelled by having shacked up with a former student. He doesn’t even understand his power or privilege and The One is clear that such ignorance is no excuse. But he isn’t a villain and John Hopkins, who takes the part, works admirably well to make this clear.

Jo is the kind of blissful breath of fresh air for female characters that has brought Jones and her sometime collaborator Phoebe Waller-Bridge such success. A femme fatale who kills the thing she loves, Jo’s complex, unapologetic and far from a victim (note how little backstory she has). Playing with honesty is a dangerous game and Jo is determined to have the upper hand. Knocking down taboos like nine pins makes her exciting to watch and, frankly, exhausting, and Tuppence Middleton goes all out in the role.

Director Steve Marmion is in perfect sympathy with the fast-paced script, never failing to pause for a punchline – of which there are many – perfectly reflecting the brilliant dialogue. It is the confrontational qualities that appeal most in Jones’ story. The sexual violence and discussions of rape are not for the faint hearted, and gasp-worthy moments, arising from both humour and tension, confirm the play’s power to deal with both our most topical and universal issues. This is a play for today that has real staying power.