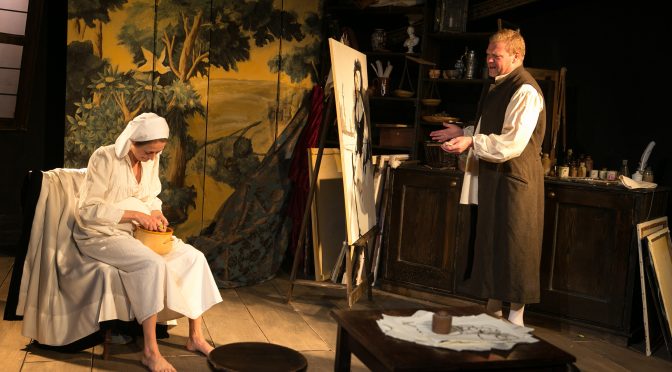 Bringing a painter’s life to stage or film isn’t easy. Choosing the best-known master of self-portraiture seems especially brave. Rembrandt – or more accurately, the artist’s impending bankruptcy – is the subject of Steve Gooch’s new play. I don’t buy the idea. There’s too much hindsight and, even worse, it’s a poor source of dramatic tension.

Attempts to add appeal to the, to my taste, dry topic of the business of art, are numerous – unfortunately none is pursued long enough to save the play from feeling monochrome and modern vocabulary becomes clunky. And while scenes of domestic intimacy between the artist, his son Titus and live-in-lover Henni benefit from a sense of the claustrophobic community of the time, it’s that old struggle of the misunderstood artist that’s hammered away at. Scenes with Jan Six, Rembrandt’s informal fixer, increase in animosity as they wrangle over art and money in arguments that are over earnest and over rehearsed.

Jonathan Kemp’s direction has secured a capable cast and it’s frustrating to imagine what they might have done with more nuanced material. Esme Patey-Ford and Loz KeyStone make appealing members of Rembrandt’s household and John Gorick is credible as the suave Jan Six.

Liam McKenna’s bullish Rembrandt keeps you on your toes and performs valiantly, although it’s a shame the central character comes too close to the stereotype of the irascible artist. Ironically, Rembrandt’s achievements as a painter, unaided by the reproductions unveiled onstage, don’t impress. Jan Six says he doesn’t want his portrait on the wall in his “front room”. I can’t say I blame him.