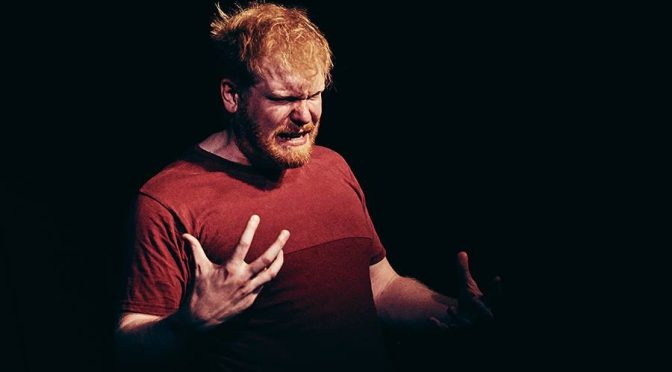 Hugh Dichmont’s play is a monologue that cleverly combines the topics of mental health and bereavement. Balancing two such subjects, both of which make many feel uncomfortable, makes this an ambitious piece, which shows a bravery that is matched by hard work and talent.

On a too-brief visit to London, this production, from Nottingham-based Influencing Machine, is marked by a careful approach to the text and great attention to detail. Much to her credit, director Louisa Sanfey displays a sense of restraint without denying the script’s lyrical touches. An extended metaphor about mortality using ladybirds is simply and effectively visualised with red and black paper. The use of music, an important component in the plot, is understated and refined. And the piece is a marvellous showcase for the talents of its performer, Steve Conlin, who holds the audience from start to finish.

If there’s a flaw, it lies with Dichmont’s blokey humour. The generic lad jokes ring true enough but are too predictable. While I suspect the intention is to make his character Terry relatable, rather than get laughs the comedy puts a strain on his appeal to us. Conlin manages to draw back sympathy with a painfully depicted panic attack and the character’s brutal honesty. As we go deep into the “stabbing” grief brought on by the suicide of his older brother, a vividly depicted figure who is both loved and resented, Terry’s own pain and the “hate and pity” he feels for his parents become palpable. Delivering the detailed observations and poetic touches so well, Conlin guarantees this small play has a big impact.