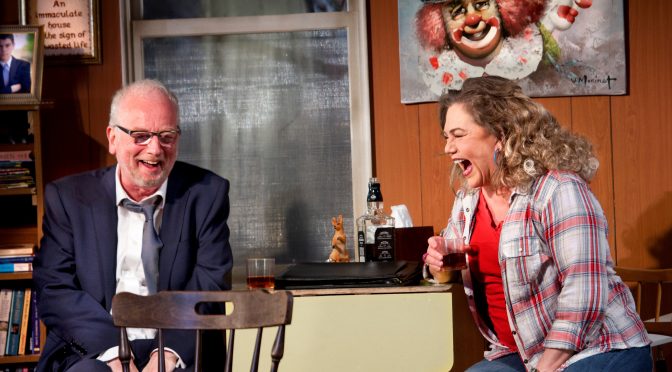 Stephen Sachs’ sprightly, award-winning comedy Bakersfield Mist is inspired by true events, namely the inspection of a newly discovered Jackson Pollock painting in a trailer park. It’s a light look at the art world while, naturally, encompassing broader issues about how we evaluate our lives.

The idea that a masterpiece could be found by someone as rough and ready as Maude (Kathleen Turner) is enough to prejudice curatorial star and snob Lionel (Ian McDiarmid). The suicidal ex-barmaid and stuffy expat academic are another variation on that old theme of the ‘odd couple’. Of course, there’s more to both characters than meets the eye. Plunged into each other’s worlds, they find common ground in their passionate beliefs and integrity, which relegate the painting’s authenticity to a sub plot. A battle of wits and wills, full of twists and turns, ensues.

Given recent American plays that have been wowing the critics, Bakersfield Mist might strike one as a little tame. But it’s conscientiously crafted and, if contrived, has more than enough ideas to its credit. Its brevity, running at just over 80 minutes, as well as Polly Teale’s sure-handed direction, leave you wanting more. Sachs has been given a gift with this cast, who bring out the best in the text and glide over more than a few flaws.

Indeed, the actors are outstanding: McDiarmid reveals his comic skills playing a pretty ridiculous Englishman, and does well to bring out what depth there is in his character to command the stage. Turner has real star appeal. As the underdog, a good deal of Maude’s battle is won for the actress by Sachs’s writing, but she combines terrific timing with a real sense of her character’s desperation, which skillfully engages the audience. Personal authenticity is a theme applied with a brush that’s a little too broad at times, but the performances in this Anglo-American double act more than stand up to scrutiny.