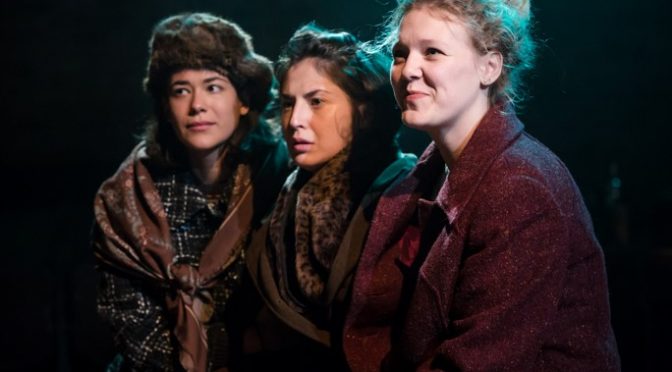 Director Phil Willmott uses award-winning American playwright Tracy Letts’ version of Chekhov’s masterpiece to deliver a fine new production with wide appeal. The adaptation, faithful to the structure and events in the original, is direct, forceful and clear – all qualities embraced and amplified by cast and creative team.

Celine Abrahams, Ivy Corbin and Molly Crookes play the eponymous siblings conscientiously. Trying to work out how to live while yearning for Moscow, each performer injects plenty of energy and angst. Joined by Benjamin Chandler as their younger brother the consistent impression is of brattish siblings suffering from “endless winter and talk”. All four performers develop their characters with precision to crisis pitch.

It’s the partners and lovers who benefit most in this production. Francesca Burgoyne, as detested sister-in-law Natasha, reveals the layers of her shrewish role well. Stephen Rodgers makes Masha’s husband more substantial than the wimp he appears on the page. And Masha’s lover, the philosophising Vershinin, becomes especially moving due to the skill of Ashley Russell. Two younger roles, soldiers in love with Irina, also stand out due to a careful performance by Tom Malmed as Tusenbach and Hugo Nicholson’s virile energy in the role of Solyony.

Willmott manoeuvres his cast expertly; it feels as if theatre-in-the-round is the only way to stage this play with debates and ideas flying around. The pace is speedy, once or twice too swift, with no fussy touches to diminish tragic events or lessen the seriousness of frustration. This is an angry show and emotions explode as often as they simmer. If there’s a fault, Chekhov’s humour is ignored. There’s little sense of the ridiculousness of situations and few attempts to raise even a smile. But the melancholy air of the play is aimed for with confidence, and that target hit with resolution.