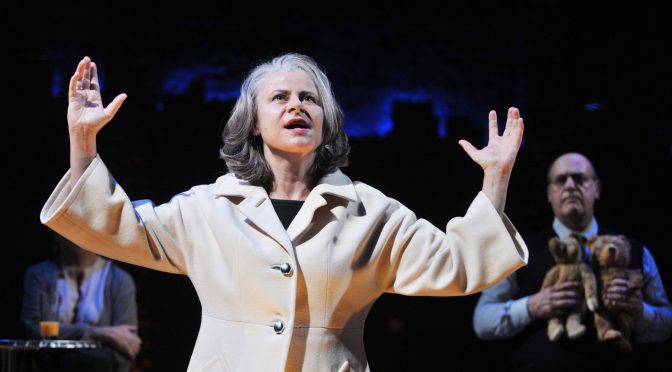 Stephen Poliakoff’s first play in 12 years, My City at the Almeida Theatre, is a story about stories. Told by a teacher, in flashbacks to school assemblies and to former pupils she meets in the present, the play is a modest, appealing affair.

Also making a welcome return to the London stage is Tracy Ullman who plays the teacher, Miss Lambert. Ullman is convincing as an inspirational mentor, captivating with her true stories of walking the city streets at night. The reason behind her nocturnal rambles interests less than it should, though, and the explanation for her phengophobia – the focus of the play’s finale – lacks power. Nonetheless, Miss Lambert is a wonderful creation and Ullman superb.

Joining Ullman to perform these narratives are two highly theatrical pedagogues, Mr Minkin (David Troughton) and Ms Summers (Sorcha Cusack). The three make a provoking trio, casting a magical hold over their ‘old children’, performed by Tom Riley and Siân Brooke. The youngsters are a rapt audience for everything from time-travelling history lessons to macabre tales from the present (both inspired by former North London student Edgar Allan Poe), and the impact the teachers have on their lives is moving yet unsentimental. Many of us are lucky enough to have known life-changing teachers and My City celebrates this intelligently.

When My City touches on topical themes it falls somewhat flat and while all Londoners can appreciate the pleasures and perils of walking the city, the play seems surprisingly lacking in a sense of place. But when the focus is on the art of storytelling – as it often is – Poliakoff and his cast excel. With Lez Brotherston’s subtle set and Poliakoff’s own direction, My City is back to basics theatre that should appeal to all.

Written 20 September 2011 for The London Magazine