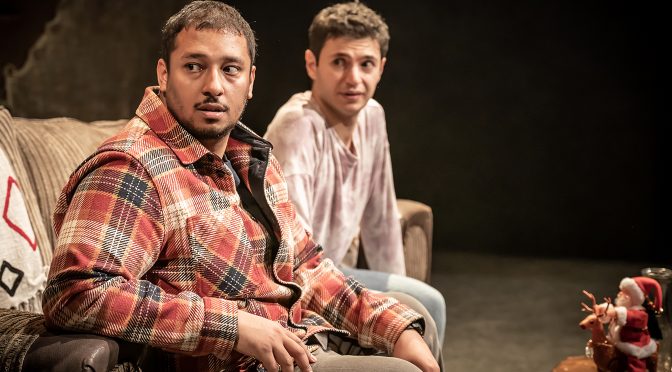 There is a Christmas tree in Stephen Karam’s play, which makes it seasonal in a way, but this smart, dark comedy is good all year round. The challenging humour is combined with deep emotions. And in a show that’s all about suffering, the treatment is remarkably light. What’s special is Karam’s distinctive voice. The writing – evidently respected in director Bijan Sheibani’s faultless production – is a unique joy.

The play follows a bad year for Joseph, a fantastic role for Irfan Shamji, who is tremendous. Joseph’s father has died in a freakish accident, his uncle is ill, and his own health is a worry. So much pain… so how come so much of the play is funny? Karam depicts a Maronite family in rural Pennsylvania (reflecting his own background), stressing their averageness. While problems could overwhelm (they touch on the subjects of religion, immigration and health care), humour rises above every issue. Shamji is the foundation for the play; his dead-pan responses to a whole lot of rubbish he hears hit home every time.

Joseph isn’t alone. The play provides him with a wonderfully written sassy sibling (a role Eric Sirakian excels in). Their relationship is, simply, beautiful. They squabble as much as support each other, working through worries and grief together. But Joseph does have to put up with a quartet of characters, superbly characterised and performed, who pain him. Vin, the young man responsible for his father’s death, needs help with the apology a court is making him write! Raphael Akuwudike makes the character a figure of sympathy and endearing awkwardness. Closer to home are a prejudiced uncle (Raad Rawi) and an arrogant journalist (Jack Holden). Both excellent performances steer clear of caricature. Best of all is Joseph’s boss, a “wealthy, deranged” New Yorker publisher who is also grieving… and funny with it. The latter is a role that the excellent Juliet Cowan makes her own, taking us to the heart of Karam’s humour.

All the characters say things they really shouldn’t. Frequently selfish, crass and embarrassing, it’s not a surprise they are funny. But note, while Karam’s satire is sharp – Joseph doesn’t suffers fools gladly even if he does suffer – there’s no toe-curling here. Cowan spouts her character’s nonsense particularly well. But, as with the other roles, there are snatches of wisdom, too. And there’s little malice. Above all, everyone’s pain is real. Suffering turns out to be a leveller. Karam may keep us laughing at unexpected moments, but his play has real soul.

Don’t make the mistake of thinking Joseph is a stoic – his frustration is palpable. The play’s title nods to Khalil Gibran, a distant relation of the family that makes Gloria sniff a book deal! But Joseph thinks Gibran is too easy. While the play has scenes with projected titles as in Gibran’s The Prophet, I suspect the Philosopher Poet is a tad declamatory a teacher for Karam’s taste. The reversal of pain to joy and the dictum “all is well” don’t convince. Given what’s going on, why should they? And yet Sons of the Prophet suggests that with honesty and warmth it is possible that we might “hurt less”. I’ll take it.