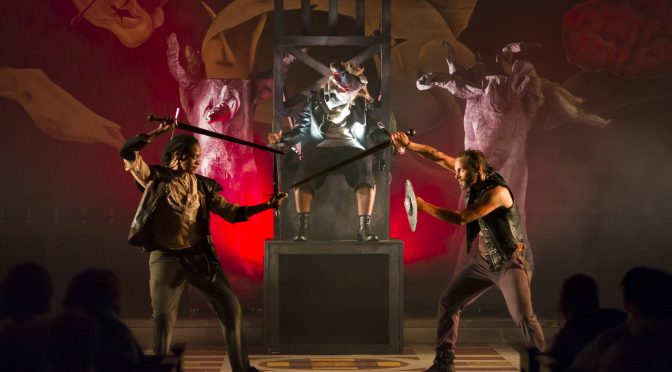 Iris Theatre is celebrating its ten year anniversary, at the so-called ‘Actors’ Church’, with a production of Shakespeare’s Scottish play that is ambitious, adventurous and immersive. Director Daniel Winder shows an energetic appetite for the play that is infectious and gets the most out of his talented team.

The production goes all out for the supernatural, with creepy costumes by Anna Sances and a satanic angle that gains potency from being performed in a church. And there’s no shortage of gore either: the Macduff family massacre comes with a PG warning. Having Macbeth attend is a great idea and his frenzied attack a shocker.

David Hywel Baynes, making a welcome return to both the company and the UK, takes the title role and is joined by Iris Theatre stalwart Nick Howard-Brown as Banquo. The two command the various spaces, of church and gardens, that the audience travel around scene by scene.

As well as displaying technical prowess, Hywel Baynes’ interpretation of the murdering monarch is also strong. Joined by Mogali Masuku as his wife – making a professional debut that’s a resounding success – we see Macbeth manipulated, then degenerate into a man drunk and dribbling with blood lust. Masuku’s Lady Macbeth is frightening and sexy (look out for Stephen Boyce’s roving eye when playing Duncan) but then scared by her spouse. It’s an emotional journey from both performers that is well delivered.

There’s good supporting work from the whole cast, but sometimes a danger of distraction in how many roles just six performers tackle. Matt Stubbs is a convincingly virile Macduff and transforms into a hired assassin superbly, and some of the doubling is interesting (Masuku also plays ones of the witches), but focus can be lost with all the changes – the production feels trapped by its small headcount.

The biggest commendation goes to set designer Alice Channon – despite the fact that her ideas cause problems. The outdoor spaces are strictly sectioned off – a bold move with a promenade performance since an audience is seldom as nimble as hoped. The start of too many scenes might be missed. But the idea is great: slowly filing past a tableau of the Macbeths’ bedroom on the way to the interval and the audience rushing into the church for the finale are electric moments.

Taking Hieronymus Bosch as inspiration is a brilliant move – providing an intelligent period aura and surreal chills. The subsequent Bosch-Banquo-banquet makes less sense than it should (more a psychological crisis than a point about Macbeth’s leadership) but it looks stunning. Amorphous sculptures, with a touch of Eva Hesse, contain loud speakers playing composer Filipe Gomes’ impressive contribution to the evening – indicative of designers taking any opportunity to make a mark. There are flaws, yes, but also exciting work.