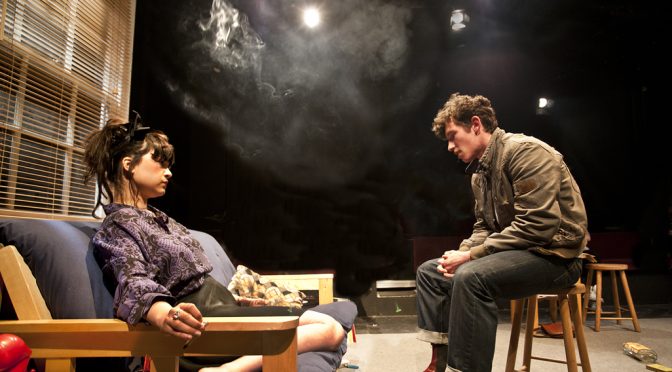 The Finborough Theatre is very much on trend with its latest production: Hard Feelings by Doug Lucie taps into current interest in the 1980s, the latest decade to receive a revival. First performed in 1982, set the year before, and not seen in London for nearly twenty-five years, dates are to the fore as we inevitably question recent history, drawing parallels and noting differences.

Following a group of friends after college, it’s a soundly constructed drama, if a touch lengthy, with plenty of comedy. Rusty and Annie have hopes to take the town, in music and modelling, and Jesse Fox and Margaret Clunie show great comic talents in these roles. Nick Blakeley is commendable as the “amendable” Baz, concerned to secure the roof over his head, and in thrall to Viv, whose parents own the house in the gentrified part of Brixton this privileged group are slumming it in.

Jane is the only member of the group immune to superficial obsessions and with some kind of career plan. Zora Bishop plays the role appropriately earnestly. With riots on the doorstep, and the idea of being an “extremist” carrying very different connotations to now, her boyfriend Tone, introduces some heavy-handed politics. This role is the play’s biggest problem and, despite a passionate performance, Callum Turner understandably struggles in the part. Tone’s attempts to “re-educate” this “nest of vipers” are arrogant and his analyses simplistic: in short he’s a frightful bore.

Designer Stephanie Williams has done a superb job with the 80s fashion on show, (notably in advance of the V&A’s Club to Catwalk exhibition) and director James Hillier has marshalled his young cast, for whom the early 1980s must feel medieval, admirably.

It’s the performance and the role of Viv that gets Hard Feelings a whole-hearted recommendation. Lucie has written a fascinating character with a satisfying depth that the talented Isabella Laughland really contributes to. Happy with her parents property investment, “sitting on their money watching it grow”, she starts out observing, “I’d rather watch it grow in Chelsea”. Fair enough. But Viv’s development, into something unhinged and formidably power crazed, is handled superbly – Laughland is magnetic, as she becomes a landlady not for turning.

Written 14 June 2013 for The London Magazine