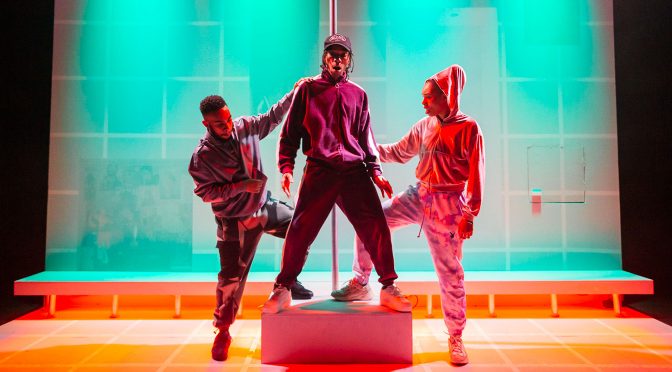 Dior Clarke’s semi-autobiographical play is full of affirmation. From the start Clarke tells us his tale is a “self-love story” and characters keep positive in the face of difficult circumstances. The script, written with Stephanie Martin, suffers from self help mantras. But growing up gay on a rough estate, with an abused mother and a brother in trouble, needs determination and bravery – Passion Fruit has plenty of both.

Valid as the project of representation is – bringing new voices to the stage is important – the play isn’t innovative dramatically. The story is simple and much of the subject matter predictable, a lot of it depressingly so. There are no surprises: from a child questioning how men “should” behave, a teenager hiding his sexuality, through to the happy drama school ending. Instead, the show’s strengths come by adding energy to the story.

First, there is Clarke himself who brings considerable presence and physicality to the stage. Clarke deals subtly with showing a five year old, a school boy and then a petulant teenager: while the character is loud, the depiction is restrained. There are moments when delivery of the lines might be clearer, and direct addresses to the audience occur too often. But the emotions aroused by his family and community are sincere. Strong comic touches are even better.

Clarke is supported by two tremendous performances. Under the tight direction of Melinda Namdar, Charlotte Gosling and Hayden Mampasi perform all the other roles and don’t put a foot wrong. Mampasi is great as an elder brother, then potential boyfriend, as well as having an excellent comic turn as a grandmother. Gosling’s performance as the mother grounds the play from the start. And she impresses as different love interests, both female and male.

Gosling joins Clarke in two of the show’s strongest moments, intimate scenes where sex is depicted with originality. A clubbing scene is another highlight, as Clarke pole dances and explains the importance of wild nights out (albeit with unbelievable sophistication for a 19 year old). The movement in the piece, directed by Kane Husbands with Mateus Daniel, is interesting throughout – fighting or flirting as well as making love, it is the movement in the show that makes it worth watching.