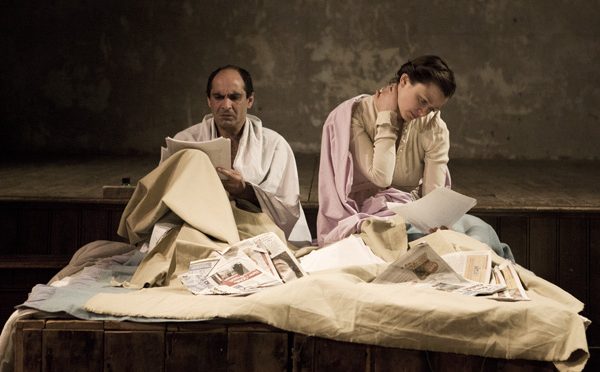 Politics and prayer seem to have been much more interesting 400 years ago, at least if Jonathan Holmes’ new play at Wilton’s Music Hall is to be believed. Set in 1611, Into thy hands is a story of sex and death, religion and science, with the life of poet and preacher John Donne as its catalyst.

Holmes is a scholar as well as the production’s writer and director. He has staged a Jacobean court masque as well as recovering some of Donne’s songs and both become valuable additions to his play. So Into thy hands doesn’t wear its learning lightly, it’s too ambitious for that. There’s even a nod to verbatim theatre (another of Renaissance man Holmes’ interests). You have to be on your toes for this one.

Part of the challenge is the inspiration taken from Donne’s poetry. Complex and full of conceits, you could never call it an easy read. Rewarding certainly, but characters discussing theology in this manner is hard work. Donne’s very name is a case in point, dripping with puns and prophecy – he can be finished, satiated, but also downcast, undone. Donne’s role in public life adds another level: he becomes trapped as a symbol himself, forced into the church as a reformed soul. For Holmes, the early seventeenth century was a period when a new world of science and religion saw “words move” while reactionaries fought to pin everything “in place”.

Donne’s position in this struggle is never less than compelling. He wants to be “a voice not a text”, arguing for fluidity and a sensuality that is shockingly modern. Zubin Varla plays the lead and delivers his verbose lines with remarkable fluidity, convincing us of the man’s passion and originality. But Donne shouldn’t just be unconventional and Varla’s occasional rants make him unconvincing – a flaw in a man so famous for his sermons.

Listening to the debate is Donne’s circle of allies and adversaries. It is a strength of Holmes’ text that he attempts to give a voice to the strong women of the period. Donne’s wife Ann is a fascinating character, played articulately by Jess Murphy. There are also strong performances from Helen Masters as Lady Danvers and Stephanie Langton as the Countess of Bedford. The latter has to deal with some explicit scenes concerning her character’s sexuality and manages to create an emotionally rounded performance.

Nothing about Into thy hands is easy. Even the humour is a sophisticated kind of bawdy. But any trip to Wilton’s music hall is worth taking and Holmes deals well with the building’s fantastic acoustics. This ‘hidden gem’ of a stage, derelict for so many years and London’s last surviving music hall, is at risk because the Heritage Lottery has refused a grant for its redevelopment. This makes a visit more important than ever – and with a play that has a preacher as its hero, surely a donation is called for?

Written 3 June 2011 for The London Magazine