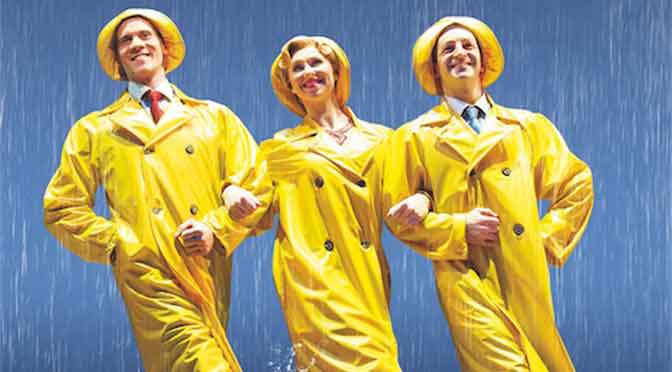 Now well into its second successful year in the West End, director Jonathan Church’s acclaimed production of Singin’ in the Rain is a reverential remake of the beloved MGM film. Determined to create the feelgood factor and equipped with enough simulated showers to make sure it does just that, recent changes in the cast mean a new set of talented performers drench and delight those in the front rows of the Palace Theatre.

The newest cast member is Jennifer Ellison in the role of silent movie star Lina Lamont, whose career is endangered by the introduction of talking pictures – incompatible with her hilarious Noo Yawk accent. Ellison reproduces the voice in fine style, with a larger-than-life delivery perfect for the role.

Also a recent addition to the show, Louise Bowden plays the female lead Kathy Selden to whose vocals Lamont lip-syncs. And what a beautiful voice it is. Even better, Bowden’s dancing is divine. Adding the comedy to the show is Stephane Annelli as Cosmo Brown, who gives an appealing performance and an athletic rendition of my favourite number, Make ‘em Laugh.

Despite the wonderful songs Nacio Herb Brown and Arthur Freed wrote for the film, Singin’ in the Rain is really all about dancing. Thankfully, still in the main role, the fantastic Adam Cooper is more than up to the job. Making the whole thing look as easy as anything, he is a joy to watch. The accomplished ensemble join him and have plenty of fun with choreographer Andrew Wright’s clever renditions of the famous numbers. But all eyes are on Cooper as, amazing as it sounds, he gives a performance of which even Gene Kelly would have been proud.

Written 7 March 2013 for The London Magazine