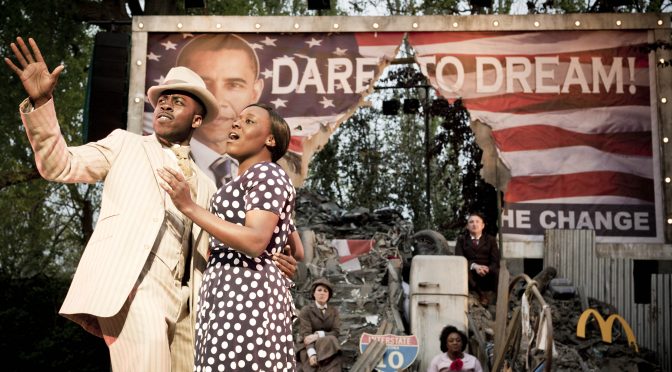 The Regent’s Park Open Air Theatre’s annual musical is an essential part of summer in London. Following hot on the heels of recent successes might intimidate a lesser man than director Timothy Sheader, but this year’s show, Ragtime, is more ambitious than ever. In a season crowded with events, it’s a bold and spirited affair.

Flaherty and Ahrens’ musical is a serious, dark work about American history and ideas, with a complex score that draws on the music from which it takes its title. It’s a challenging piece, taking on racism and terrorism with strong language; and there’s no playing safe for Sheader, who fights to make it relevant and broadens the work in astonishing fashion and to wonderful effect.

Jon Bausor’s excellent design is the first surprise – for last year’s Lord of the Flies he crashed a jet in the park – for Ragtime the auditorium looks like a rubbish dump with the cast entering through a derelict poster for the Obama campaign. Bausor’s work is a perfect match for Sheader’s time-bending twist on a story ostensibly set in 1906. The focus is on the power of politics to change and Ragtime’s ideals are moving ones. In true musical style, the characters’ aspirations gravitate around the world of entertainment: this is a world where dreams and drama occur “in heaven, in trouble and in Vaudeville”.

The production spoils us with strong central performances. Rosalie Craig and David Birrell are superb as a wealthy husband and wife whose lives intersect with the tragedy of a black couple, performed with great intensity by Rolan Bell and Claudia Kariuki, who makes a professional debut not to be missed. We also get a story of immigrant success, powerfully portrayed by John Marquez, and a host of historical figures that include Stephane Anelli as Harry Houdini in a scene-stealing escape act.

Sheader excels when dealing with Ragtime’s ensemble nature. The whole cast works exceptionally hard and shows great acting skill as well as doing justice to choreography from Javier de Frutos. Although one might consider Ragtime an alternative take on the American dream, it is deeply patriotic. Even though we have plenty of patriotism of our own at the moment, when this cast sings together it is sure to raise goose bumps regardless of the weather this summer – or your nationality.