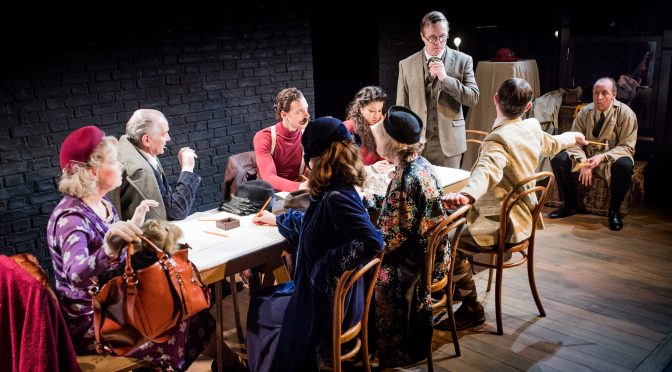 On the day of the London marathon, an award for endurance is deserved by director Tom Littler, the mastermind behind this revival of one-act plays by Noël Coward. Presented as three trilogies – that you can happily attend separately and in any order – the chance to see these seldom performed works classes as a Theatrical Event. With nine actors preforming 75 roles, everyone should agree it deserves those capital letters.

The groups differ from Coward’s original selection but still showcase his writing perfectly. As a comedian, Coward is seldom bettered, his plays full of wit and delicious satire driven by great observations. But we also have Coward as a writer of romance, with insight into the power and pain of love. And he’s an artist full of original ideas. Littler’s skill is to treat each text seriously, to understand the complexity of its construction, and every play benefits from this intelligence and respect.
See one, or even better see all three; it’s tough to recommend a favourite but here are some highlights based on the groups as titled.

This set stars with a sparkling comedy. Suffice to say the scenario of a group of actors trying to perform as a charity committee is as funny as it sounds. Theatrical back-biting and pretentions abound and nearly every line gets a chuckle. The whole ensemble appears and shows how even their abilities are. In subsequent plays, Boadicea Ricketts and Ben Wiggins fill a variety of smaller parts, but their roles here reveal them both as strong performers.

Musical hall veterans The Red Peppers make an appearance in the second play, the roles are ably performed by Rosemary Ashe and Jeremy Rose. But the piece hasn’t dated as well – a regional variety show isn’t something many people have experienced and it’s unclear how much respect we are supposed to have for our leading couple. But what comes next is unmissable: Still Life is the play that became Brief Encounter. It’s full of familiar characters, jokes and lines. Littler brings an admirable freshness to the piece and garners superb performances from Nick Waring and Miranda Foster as the star-crossed couple who sacrifice passion for the sake of their marriages. The chemistry between the two is so fantastic that it is transporting to watch them.

Waring and Foster flex their comic skills in Ways And Means as a scheming couple down on their luck. It may be slight but it’s still pleasing. Another strong pairing comes with Ian Hallard and Sarah Crowe. First, there’s a take on Brief Encounter that’s purely for comedy with love at first sight, on the dance floor, followed by an oh-so civilised discussion about what to do next and a suitably cynical end.

The confirmation of Hallard and Crowe’s comic skills is clear, but later, in Shadow Play, they perform as a couple with marital problems that tugs at the heart strings. For all the cut-glass accents and wealthy posturing that often gets a laugh, both performers remind us that these are people we can relate to. A love gone cold and a struggle to remember happier times come together in a review of their relationship via a sleeping pill-induced dream that shows a surprisingly surreal Coward. The singing and score are startlingly contemporary. The whole piece is a revelation.

This set boasts two comedies and a fine drama. For Family Album, Coward’s target is the hypocrisy surrounding funerals. Victorian vibes through a stunning wardrobe make it a good place to mention the consistently strong work from costume designer Emily Stuart. The satire is biting and musical director Stefan Bednardczyk serves as a scene-stealing butler. Again, it’s the music Bednardczyk plays that provides the surprise, with songs serving to show snatches of memory and fleeting moods in a bold manner. There’s more comedy with Hands Across the Sea, a personal favourite, where Coward takes aim at the Britishers’ attitude to their own colonial cousins: it’s bright, snappy and eminently quotable.

As a finale, a psychiatrist is driven mad by love in another drama of infidelity that is riven with tension. Foster and Waring are paired again, and the result is explosive. Their intelligent characters are full of “clear cold sense” in a play of surprisingly raw emotion. The unexpected makes for a theme of much presented here. As with all the offerings in Tonight at 8.30,this is a humbling demonstration of Coward’s talents, produced and performed by an impeccable team.